The Pecos Triangle gets it name from the Bermuda Triangle.  Both places are ripe with unexplained  vanishings. These mysterious disappearances baffle the authorities and seasoned searchers.

This section will concentrate on the strange goings on outside of the northern New Mexico town of Pecos. What is behind these vanishings?  An animal, a lunatic, a monster, extra terrestrials or some type of portal?  You be the judge, and if you have any info contact me---  santafewriter@me.com  phone

THE STRANGE CASE OF MEL NADEL

What is so odd, is that during the first  days of the search, Mel's footprints were found by search dogs, the prints led--depending on which report you read- 50 to 150 yards  away from the camp, the prints followed a trail. Then Mel's prints are truncated, they go no farther.   50-150 yards from base camp is not a long distance, most people would feel very safe this close to their camp, a point of reference. ( The number that is now bandied about is 120 yards.)

However, Mel's scent and footprints end at this point, 50-150 yards (120 YARDS)  away from the camp, they do not go off to the left or right. At this location there is no sign of struggle as in Mel being attacked by an animal or human. There is no blood, torn clothing, spent shell casings, arrows, or bear + mountain lion prints.

What happened to Mel?  None of the limited evidence made sense.  IS IT POSSIBLE -- MEL WAS TAKEN AGINST HIS WILL BY AN ALIEN -- UFOLOGY REPORT -- CLICK HERE

Mel's footprints just stop. Is it possible he carefully backtracked to the camp then to the road and had somebody pick him up, and he then went underground, as into a new life.  According to the experts, NO. None of Mel's monied accounts have ever been touched. Also, Mel was very happy with his family life.

How can a man not leave one shred of evidence behind as in what became of him?  None of his arrows or bow or any shred of clothing have ever been found, and the area where he disappeared has been repeatedly searched through the years.

For those who think the search was not done correctly and Mell rain into trouble at the base camp. --- If Mel was at the camp when he disappeared, there is no evidence of a struggle at this site. At the camp there are no animal prints, drag marks, blood, bits of clothing, spent casings, etc.

During the search Mel's Philippina wife, Edna said , "People just don't disappear."  In Mel's case, they do, and there is no shred of data indicating what overwhelmed him, or where he went or was taken to.

"PEOPLE JUST DON't DISAPPEAR" -- CLICK ON VIDEO ICON --- NOT A SHRED OF EVIDENCE ON WHAT HAPPENED TO MEL NADEL-- AFTER ALL THESE YEARS--A CLUE SHOULD HAVE BEEN FOUND! 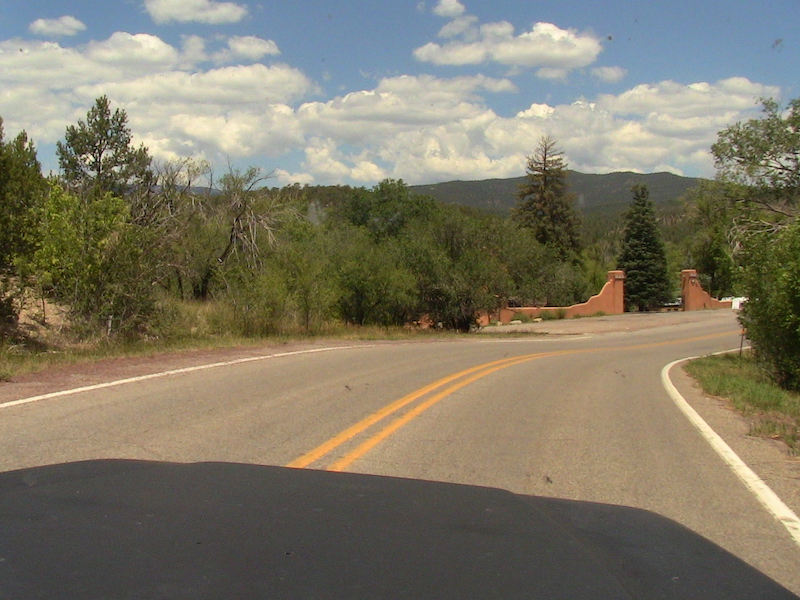 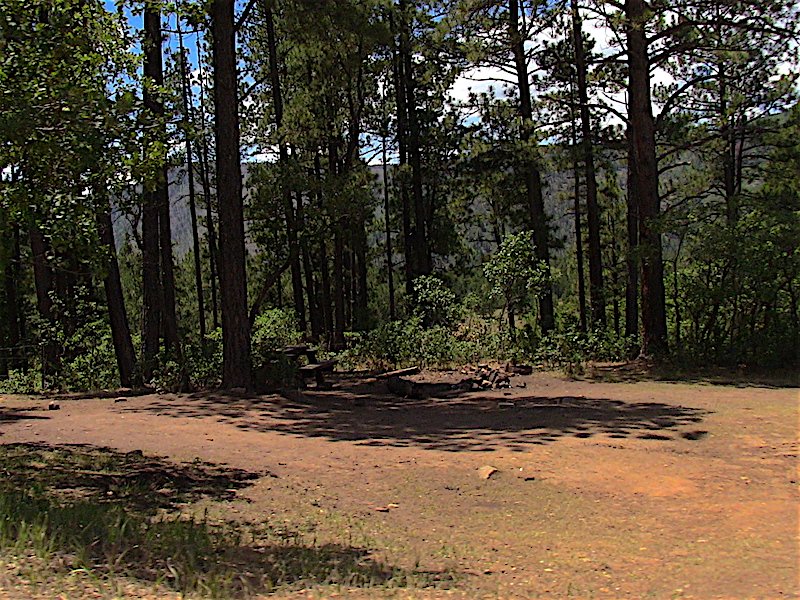 There are picnic areas and paths + timber roads + fire breaks in this area where Mel vanished, look at the following photos, the area is not like a trackless AMAZON jungle or a many layered VERMONT FOREST, there are fields and points of reference = mountains or repeater station (RADIO TOWER).. 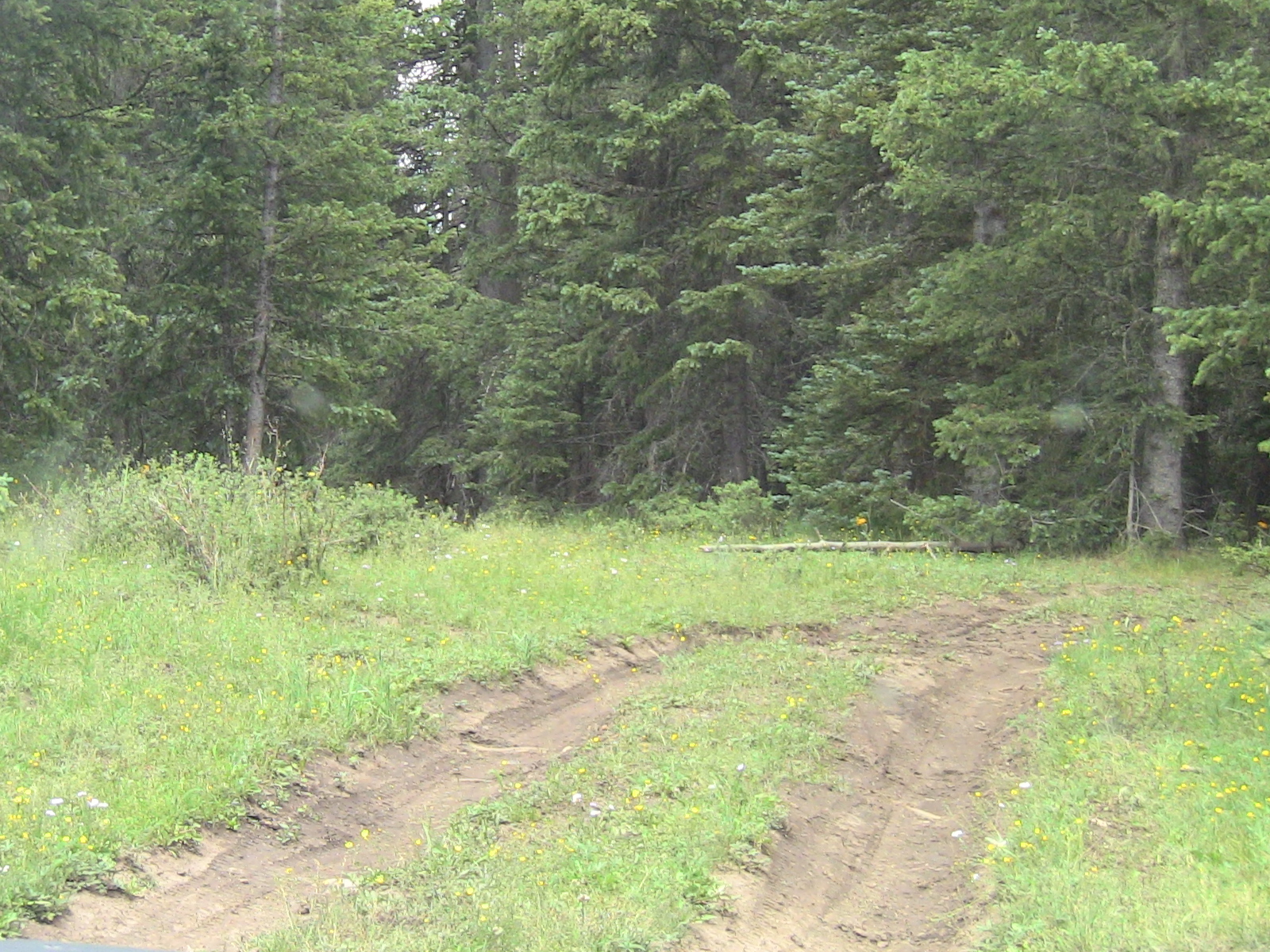 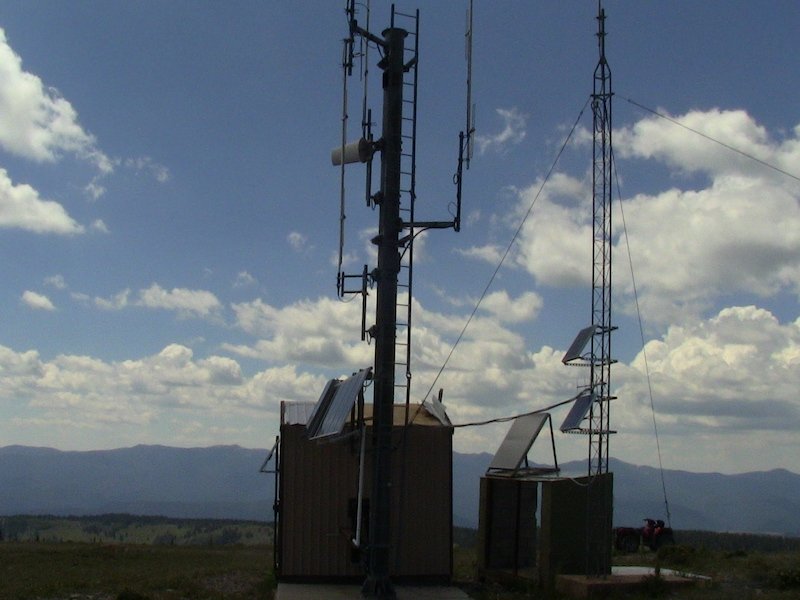 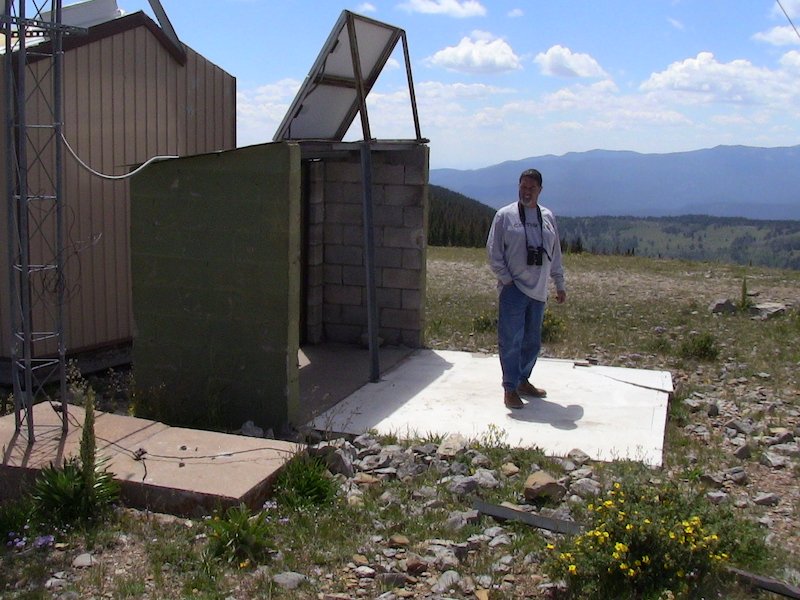 Above on investigation -- MARKUS DURAN at the repeater station, this area is easily seen and can be gotten to, there are paths and roads leading to this point.  IF you like how thorough this search was or how thorough this article is, then you would probably like one of ALLAN PACHECO's Paranormal-ghost tours.  Click here for info. 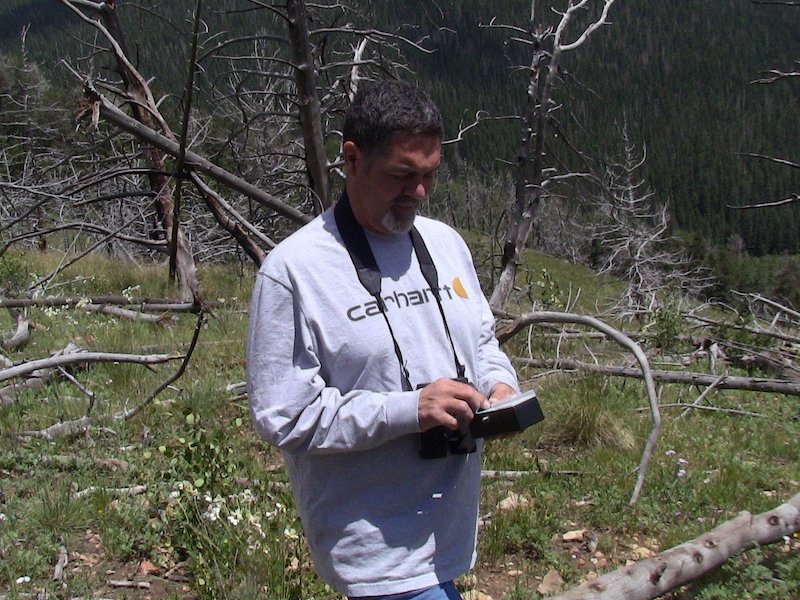 Above -- MARCUS DURAN on a search with instrument. Below: Likewise -- ALLAN PACHECO on search with different instrument.  Nothing makes sense, in this or in other vanishings in the TRIANGLE.  Is UFO or ALIEN abduction --- at the root of all of this? 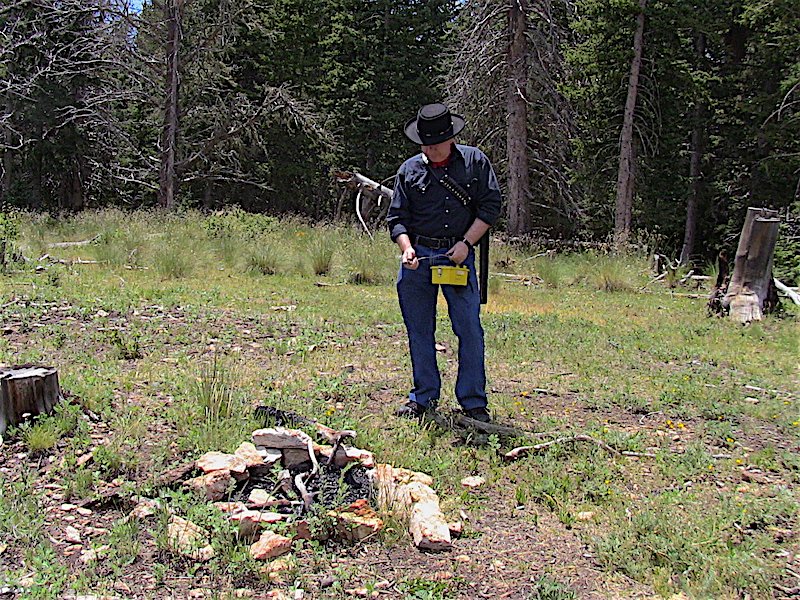 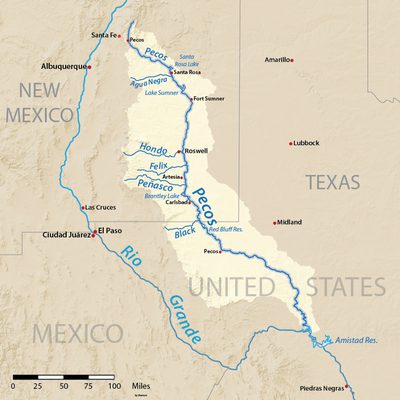 Cows are found in some of the areas, ranchers pay a fee to the FED and the animals graze in the National Forest, later on they are rounded up.  Again-- this area is not TRACKLESS. To the unknowing eye-- the ELK MOUNTAIN may look like a WILDERNESS -- but it is not. Farther NORTH into the area beyond SANTA FE's HYDE PARK, the terrain gets rough, but not in the ELK MONTAIN AREA.  The place has been hunted and trail blazed since the conquistadors first got there in the 1500s. 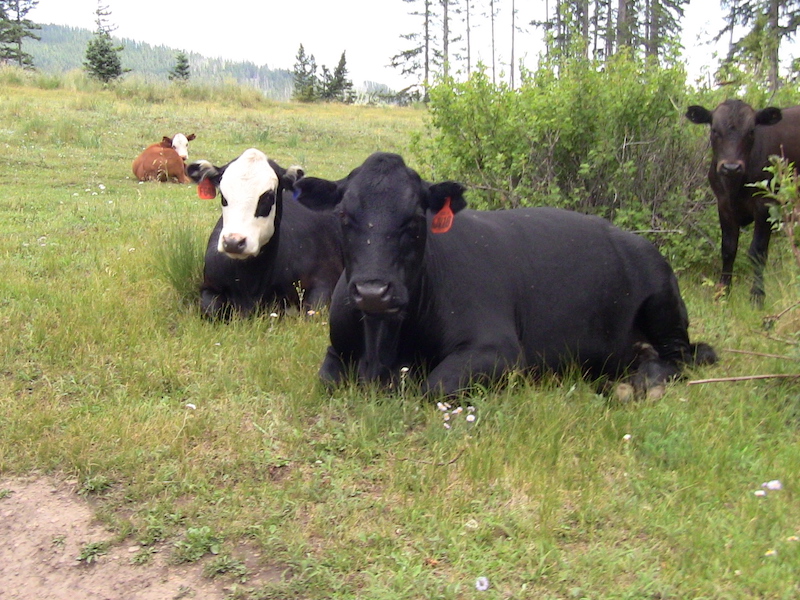 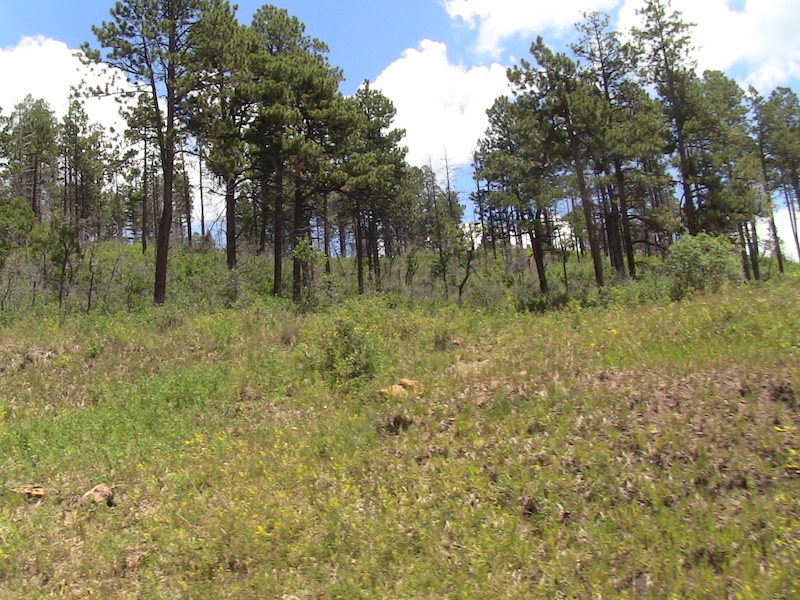 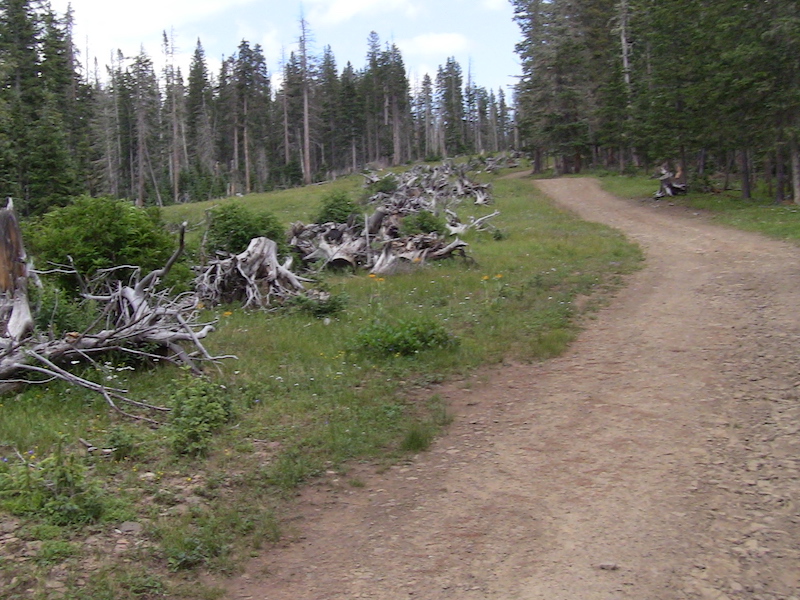 The area is not DARKEST AFRICA -- the place is cut with fire breaks, hiking trails, old Indian trails, paths to old abandoned pioneer tracts, etc.  There are areas, where there are no trees, where you can get your bearings if you loose your compass; in other words this is not the HIMALAYAS. Point being, how could Mel never have been found? It tract was many times thoroughly searched. Below: The area is cut by all kinds of creeks that feed into the Pecos River.  If you go down into the valley BELOW you get to Soldier's Creek which intersect the Pecos, there are cabins and trails  on this and other creeks, and eventually you get to the town of Pecos. 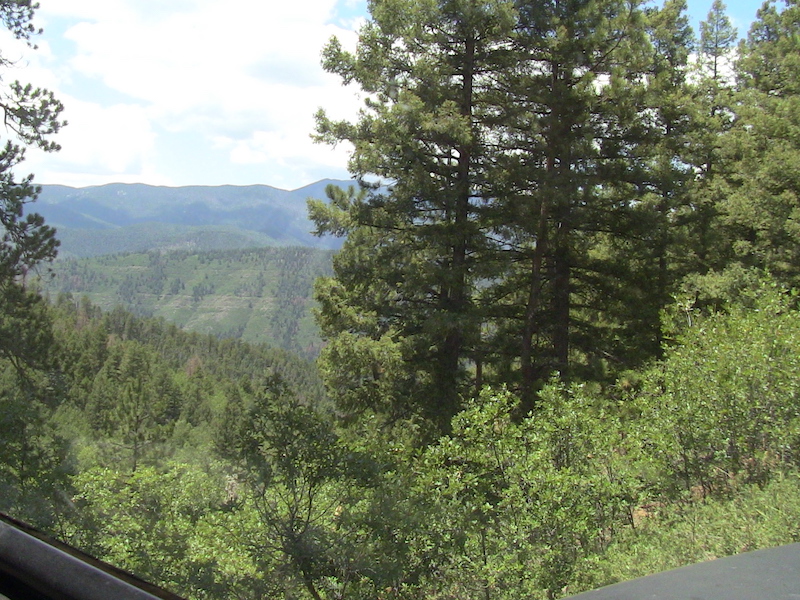 Below this area is where the HQ was located at for the big search, in front of the metal corals. 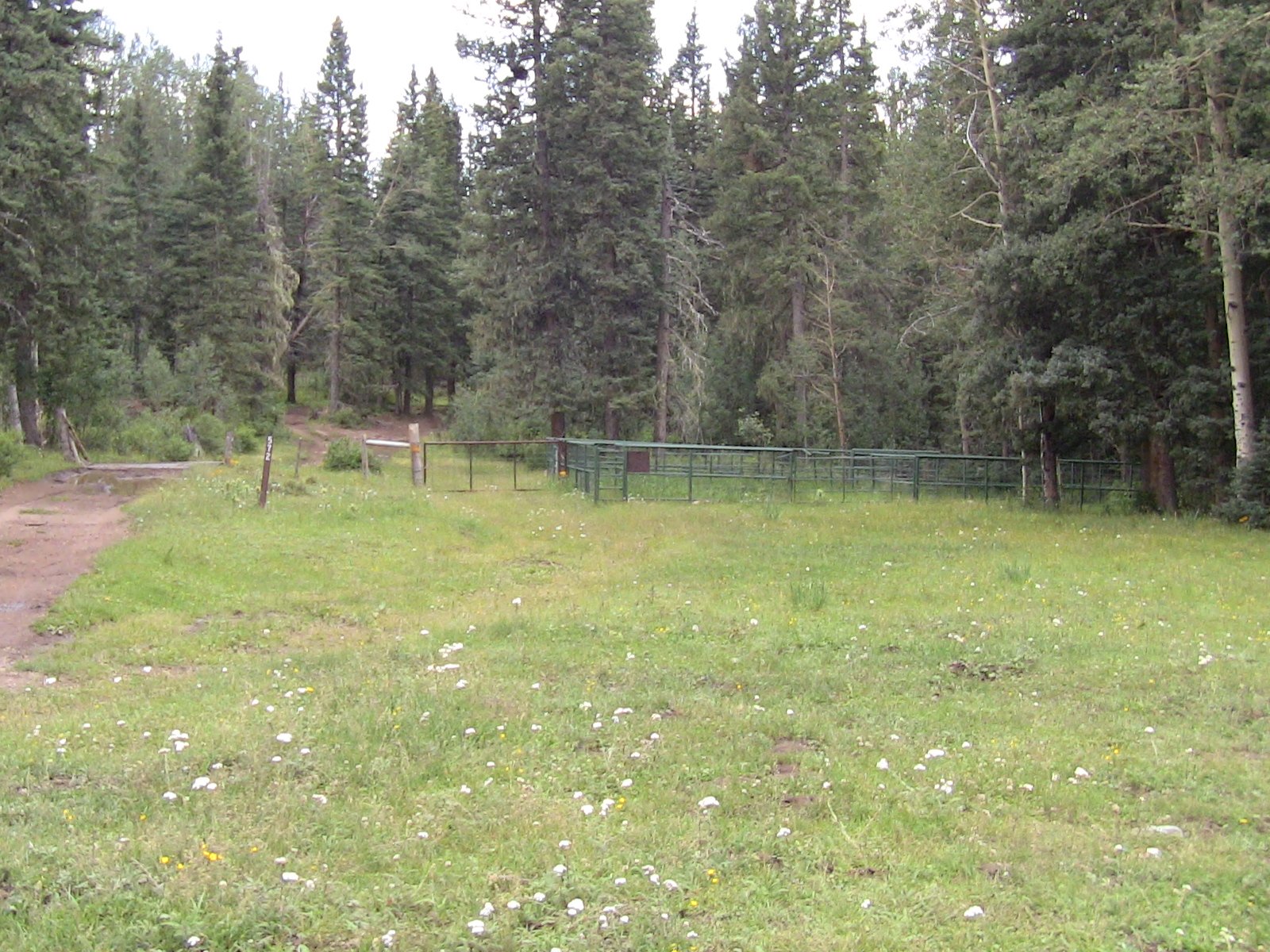 If lost, you can find a path, a trail, a road, an open field-----you will be found...  With the search that was mobilized for Mel, a plane, helicopter,  person on foot or horseback will find the missing person.  The searchers scoured quadrants, and worked an area in a line movement, but remember--- MEL's FOOTPRINTS were found and they just truncated as if he had vanished at that spot. 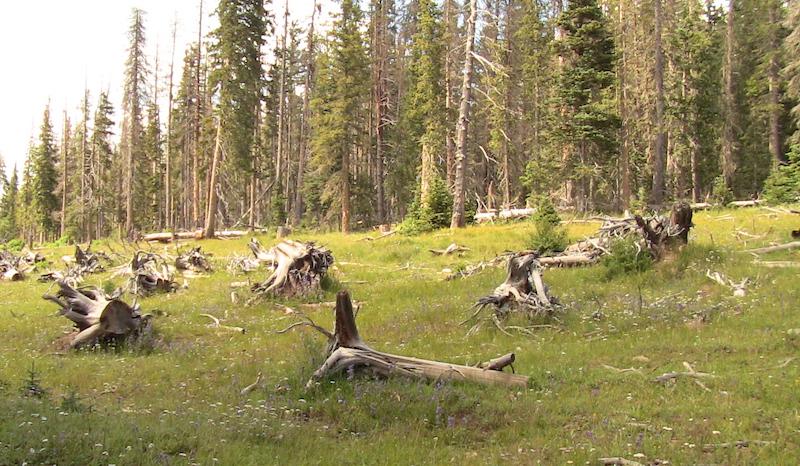 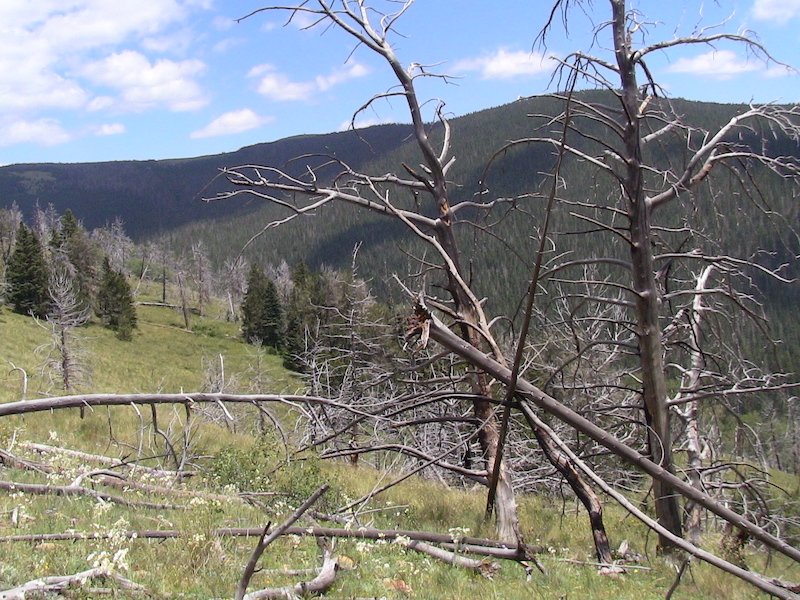 WITHOUT A TRACE -- VANISHED --

The below video concerns itself with Stanley Vigil who was last seen November 7, 2017.  Sadly this man has not been found.

UPDATE -- the body of Stanley Vigil was found in the Pecos river on April 7, 2018 -- his ribs were broken and his head had trauma..  What befell this poor man?

READER -- these people who go missing have people who care about them.  These missing stories are not a fictional movie plot.  The  missing have loved one who are hit with sorrow and grief, the not knowing of what happened to a person is the worse thing that can befall a family.  Stanley Vigil the most recent of the lost or missing in the Pecos area, had four sons.  Stanley Vigil is not some statistic, neither are the other people who have gone missing in this area.  This Pecos incident is NOT - NOT  NOT fiction,  if you have info, no matter how slim the clue is, contact the missing's families or the STATE POLICE 505-827- 9300 or 505-841-9256 or 911 or AL PACHECO 505-986-5002 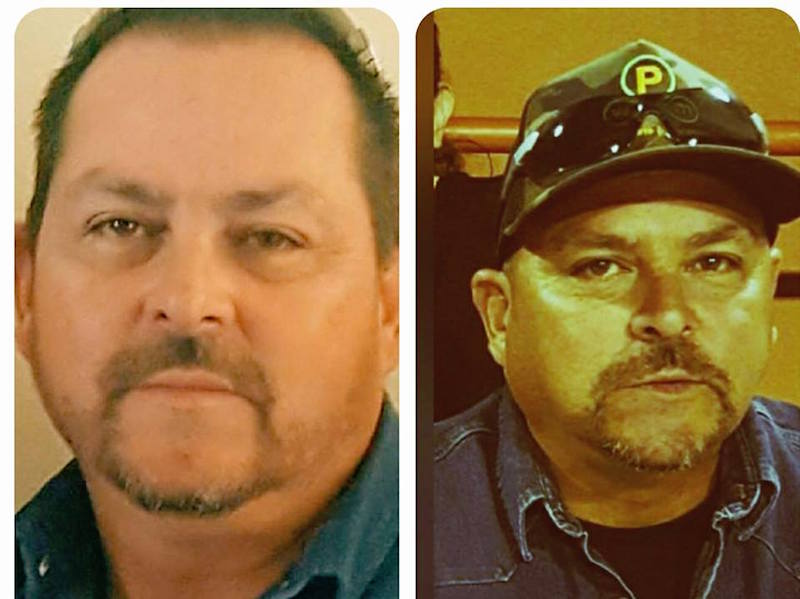 THE PECOS TRIANGLE DOCUMENTARY-- THE MISSING

CLICK HERE FOR MORE DATA ON THE MEL NADEL VANISHING  & INFO ON THE STANLY VIGIL CASE  = ANOTHER  PECOS EPISODE WHERE A MAN GOES MISSING.. STORY NEAR THE BOTOM OF PAGE. 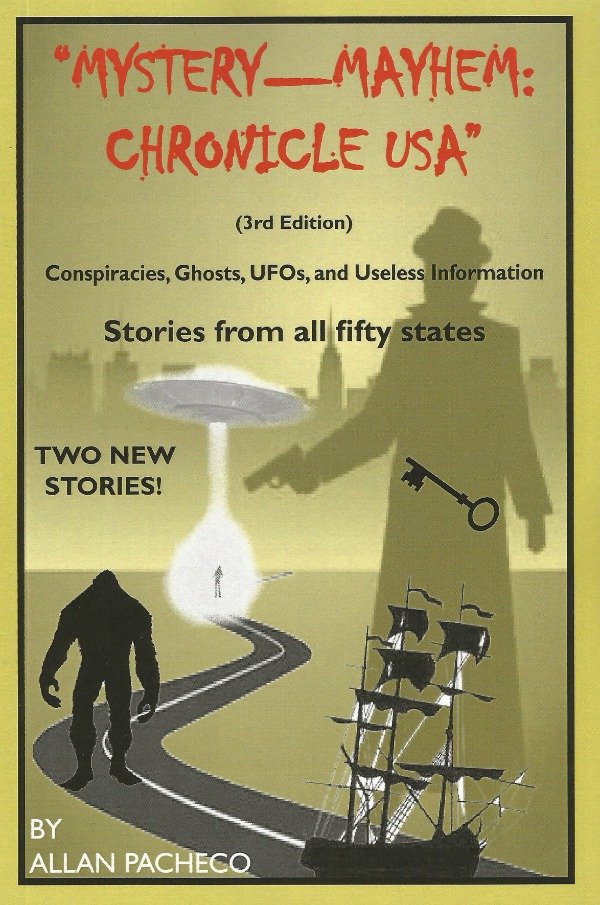 IT IS A GOOD READ!  TO ORDER CLICK ON ORDER BUTTON---LEFT-------THIS BOOK IS SCARRRRRRY! 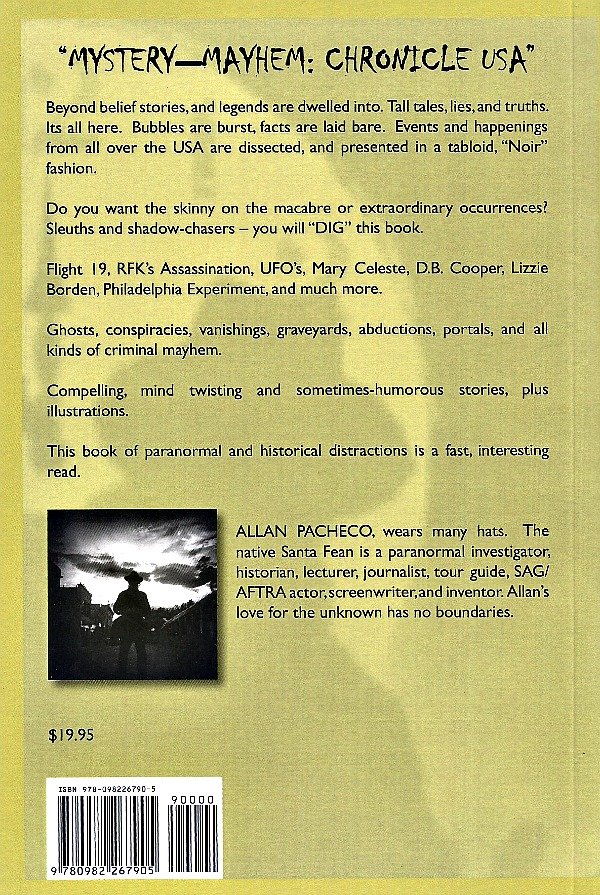 TO ORDER --- PRESS ON ORDER BUTTON -- LEFT SIDE OF PAGE--- THERE YOU WILL FIND DIFFERENT  SELECTIONS or YOU CAN GO TO AMAZON AND PURCHASE A COPY THERE. 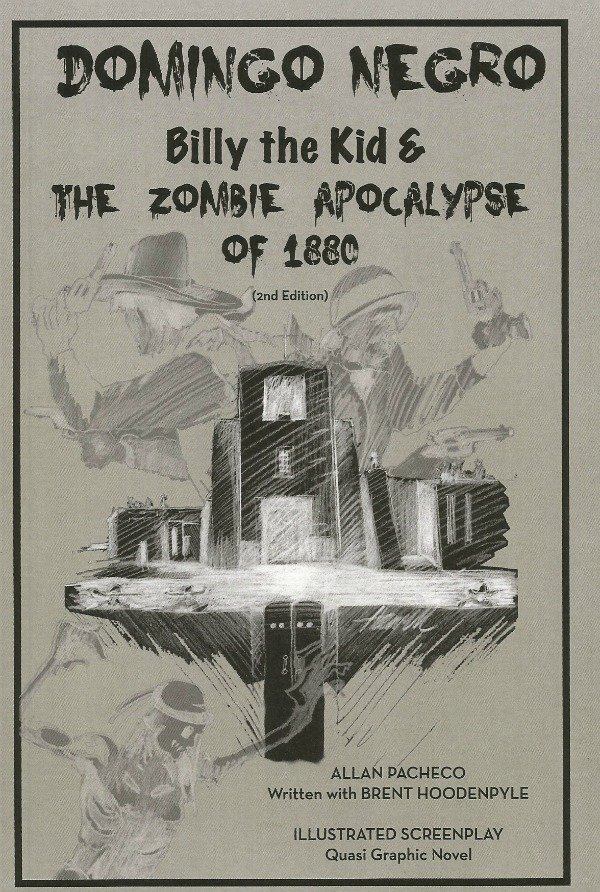 ARE THERE ANY MISSED CLUES OR THEORIES THAT CAN SHED LIGHT ON THE PECOS MISSING MYSTERY  ---------  AS COMPARED TO ELIZA LAM (LOS ANGELES INCIDENT) OR THE ANN RIFFIN (VANISHED) HOLMAN HILL, NEW MEXICO CASE?

VANISHED PAGE = THE MYSTERY OF THE L-8, WHAT HAPPENED TO ITS CREW--A TRUE STORY--CLICK HERE