Allan Pacheco has been investigating and searching for the Missing since 1973 --- (THE LARRY INCIDENT) ----- New Mexico has been the scene of vanishings that are similar to FLIGHT 19  (1946)  or the phenomena  that occurred around BENNINGTON VERMONT post WWII.  People have vanished into thin air, no trace or clues have been found as in what befell them.  As odd as this reads, in certain ares in New Mexico, people have just vanished, searchers are stumped as in not being able to locate a body, remains, clothing, etc... It is as if the ground or sky swallowed the missing.

Below: are photos from Allan's latest investigation in the PECOS TRIANGLE  trying to find out what happened to MEL NADEL --- or a clue that can shed light on his demise or vanishing.

BELOW: TO those of you that travel the area or know a little about  PECOS, NORTH of the MONASTERY is where Elk Mountain is located or where the area is ---- of where Mel vanished.  Headed North you pass this retreat and later on to your right you will head East into the vicinity where poor Mel, disappeared.  The bad thing about these vanishings is that their is no closure for the MISSING's loved ones. 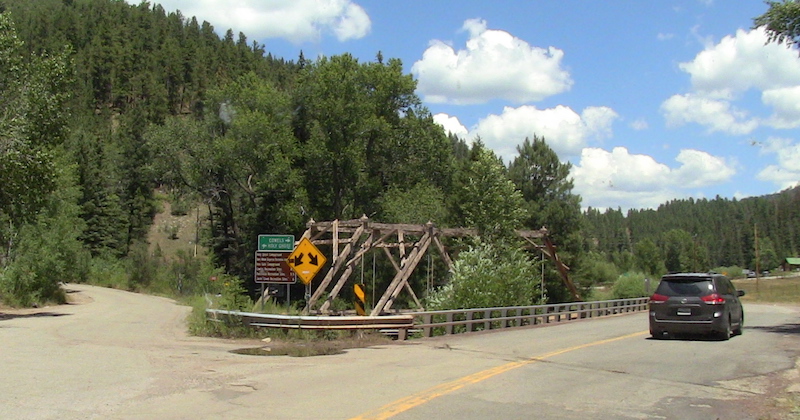 Below: Allan with the gieger counter -- trying to get some type of clues... 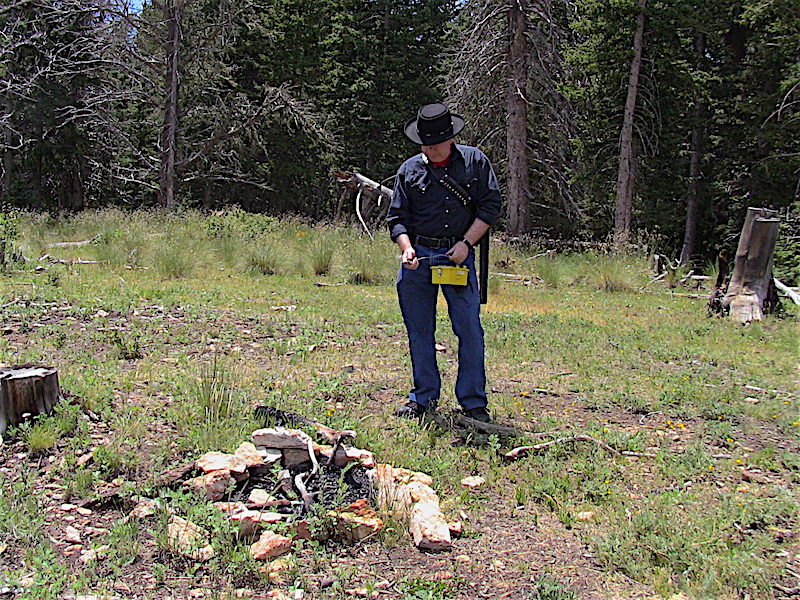 The above area was searched due to -------- an amateur psychic saying something is in this Pecos- Elk Mountain area was not right.  This location did give the investigation some strange readings and vibes.  On the search this very old fire pit was found, more importantly at this spot some reading were registered on the equipment, then the gear failed.  Once the area was left --- the equipment came back to life. Why was the investigation looking in this area of the PECOS TRIANGLE,  on the  idea that there is a doorway or portal to parts unknown that opens and closes in this scape... At times this wormhole or stargate is dormant and at other times it is active or open.   Being that not a trace of Mel's clothing or bones have ever been found, we considered the idea that maybe poor Mel ended up being taken or lured to a passageway and he fell through or was taken.  Again this area was alive with some brief flash readings, then our equipment shut down.  One thing about this terrain, hikers, campers, and hunters, have reported seeing UFOs, odd lights, heard  disembodied voices, ghosts, odd human like forms, etc... This area was known to the Indians as dangerous place, and they warned the Spaniards CIRCA 1540 about the Baaad Mojo. 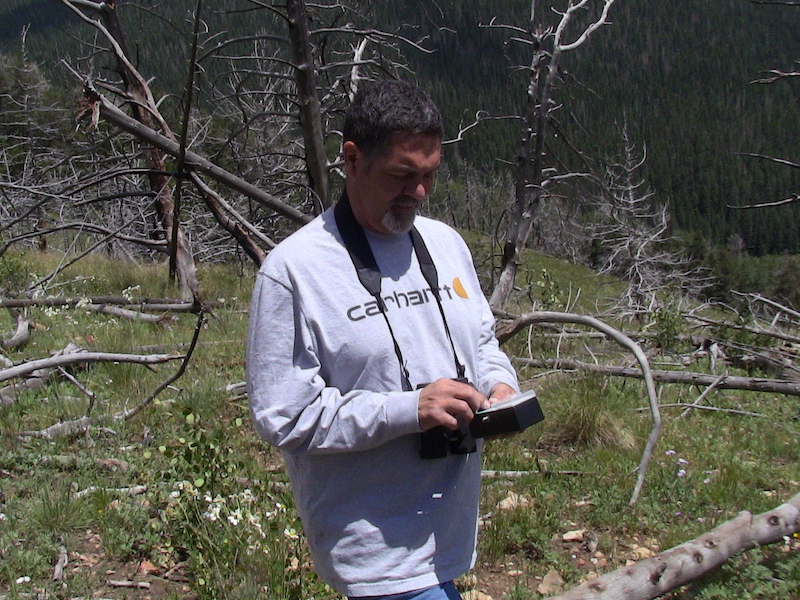 ABOVE: Where were we are located is on the ELK MOUNTAIN road or in the area where MEL vanished or went missing.   The exact spot, in these pictures and investigation is on the overlook above what becomes SOLDIER's CANYON or the canon or hollow below can connect to OSHA.  AS you can see this area where Mel vanished is not endless canopied forest, there are clearings, and all kinds of roads criss cross this scape.   BELOS MARCUS-- working a TRIFIELD and seeing what we can grid. 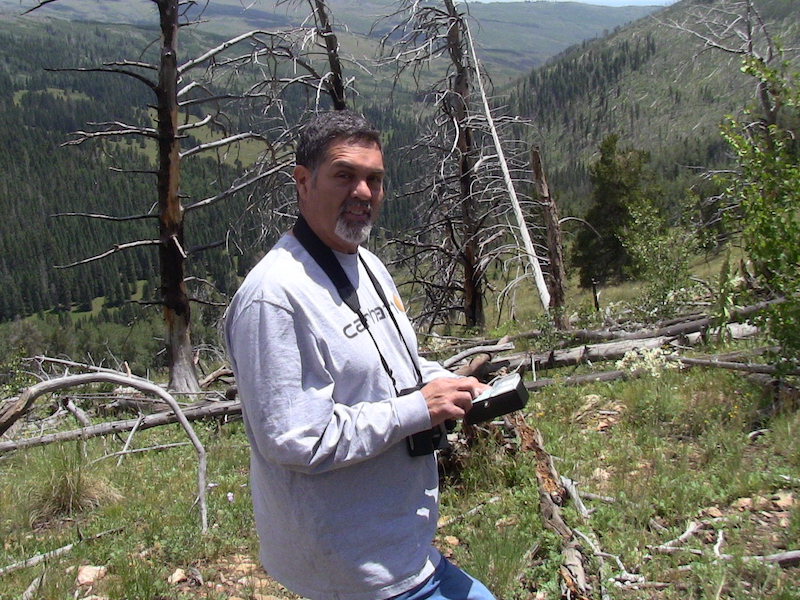 Crazy readings -- the gear did flash a bolt of energy before things went smash, no, the equipment did not whine out and stay at a pitch or RED LINE. There was a spike a whine and then --- things began to fail.  It is of note that the only time my equipment has screamed out and kept the big level RED LINE (for lack of better words) is when we were at the EMMA TRESP site, that info is on another page..... In essence  on our search for MEL NADEL clues -- what we got on our gear were some brief wild swings, then ZAP --  out went our instruments.  One thing that was very odd--- is that my cell phone got overloaded with nonsense telephone calls that flooded my phone bank that could hold 50 messages. Once flooded, my phone was not operational. What caused this no idea, but something mucked around with all of our battery powered equipment.  Further below is a link to our 35 MM photos of the investigation, the digital did not falter. The TRIFIELD, the GIEGER and 35MM did... It was odd how the camera photos went from bad to worse, take look for yourself after  seeing the digital on this page page. 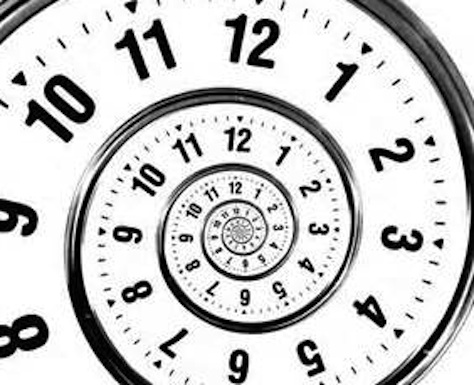 BELOW: The area where we investigated is East or beyond the green steel coral area.  This stable location was where the search was assembled when Mel went missing or better yet, this is where at times -- where the search HQ was located.  I put this photo in to give a person an idea of where we got such strange readings, as in further East from this location. 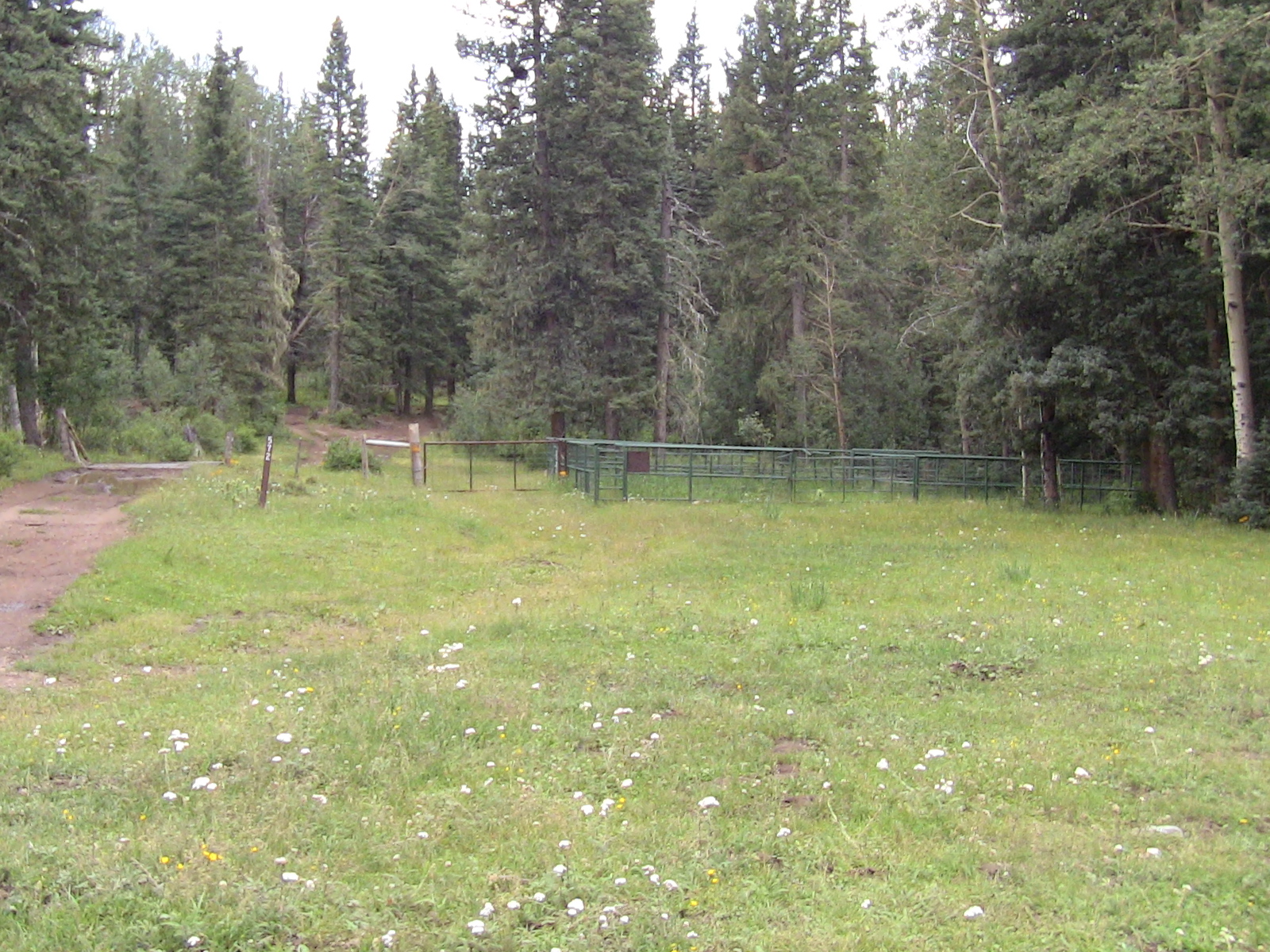 BELOW: LOCATION WISE, farther east than the below firebreak or puddled road area. Those that know the area can navigate from these directions and pictures. 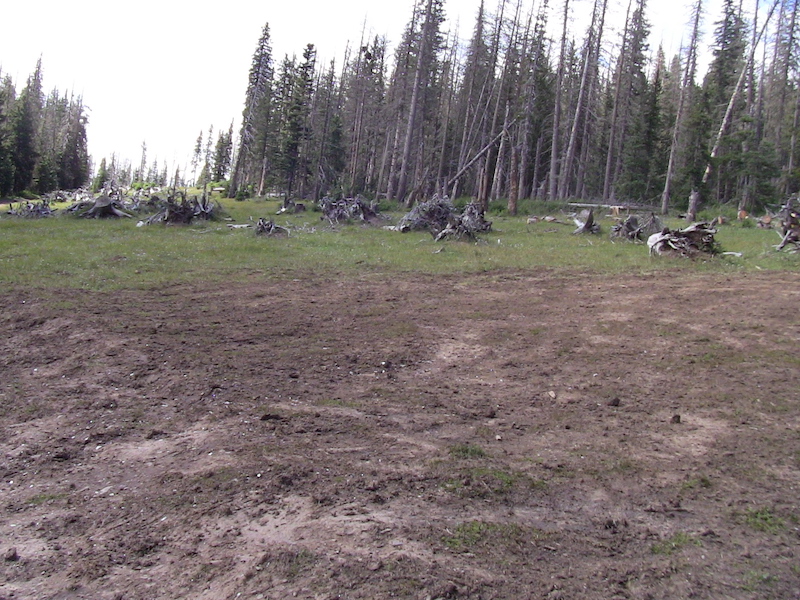 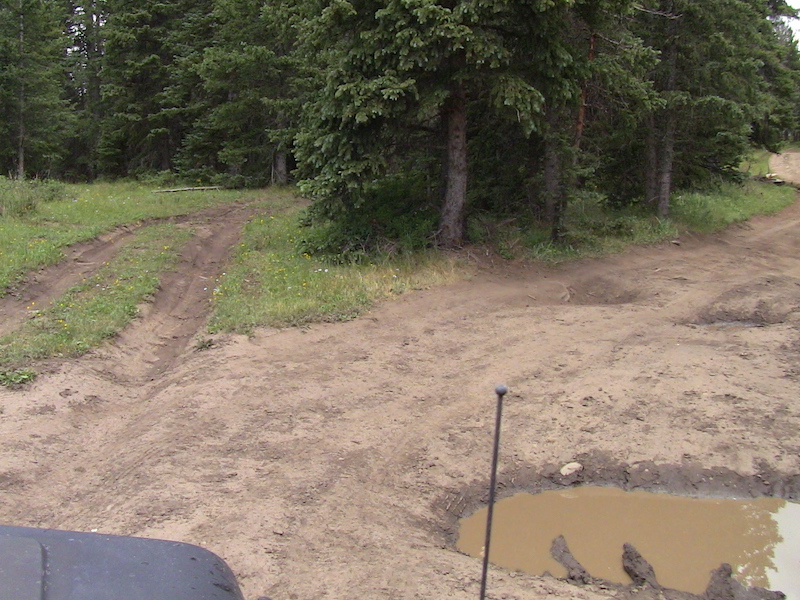 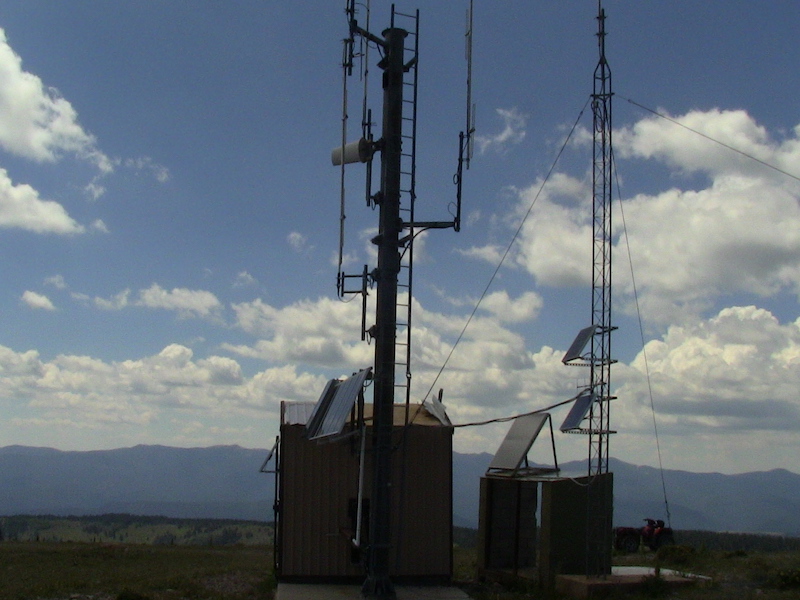 Above: At the repeater station we rechecked out equipment that had gone wonky, it was now working fine.  What caused our gear to peg out on wild reading and then malfunction at that spot, is unknown.  Another thing about the Repater station it is situateed on top of a barren peak, that  can best be described as THE TOP OF THE WORLD. When lost is is so easy to dead recon to this place and there are roads  to this building.  How MEL or others  that have gone missing and could not find their way to a clearing, a road or landmark and be found  is baffling. Then again according to the WEIRD BEARDS, these missing people did not get the chance to head for a landmark, because what befell them is something beyond belief.  Like something out of an AMBROSE PIERCE account.  Below Allan at the repeater station. 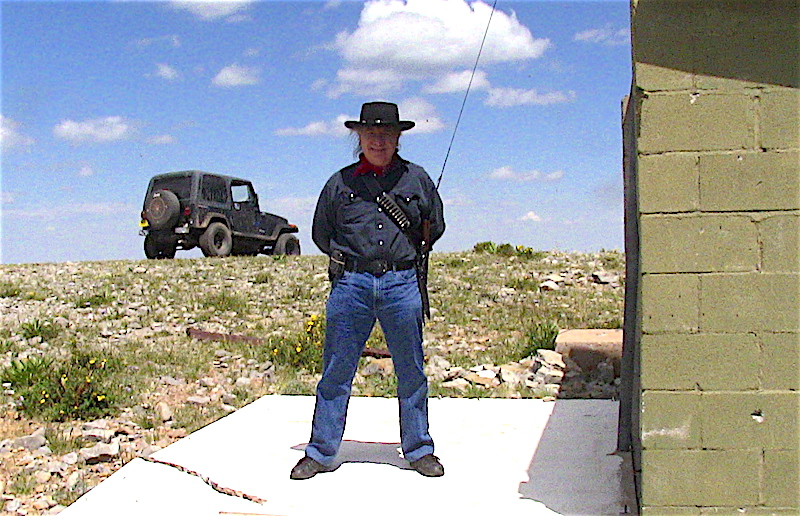 BELOW: MARKER AT THE TOP OF THE WORLD... WHO PUT IT THERE  AND HOW LONG AGO, DO NOT KNOW.   LOOKS LIKE SOMETHING ONE WOULD FIND IN NORWAY OR ICELAND, AN APPROPRIATE MARKER FOR A PLACE THAT LOOKS OUT OVER NEW MEXICO. 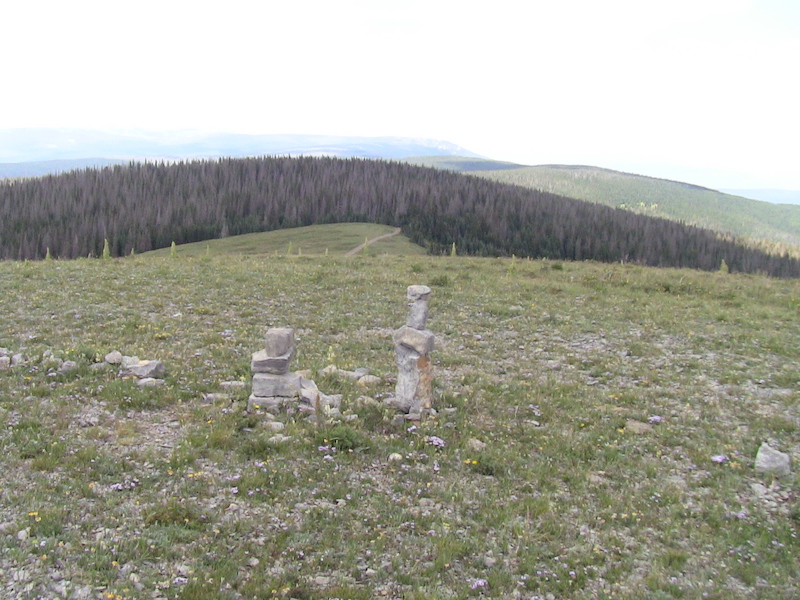 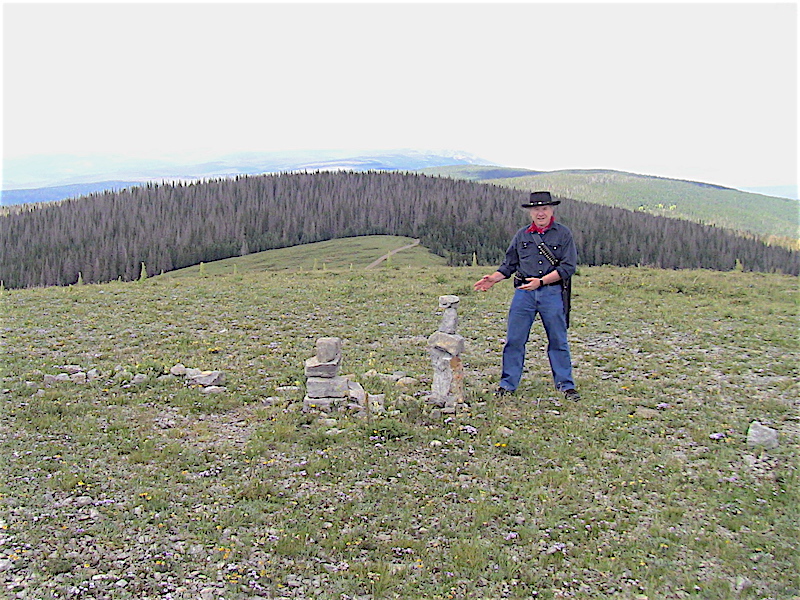 Critics will say that the search for Mel is a waste of time, and the reason why his remains have not been found is that the searchers were incompetent.  Furthermore it is claimed there is no mystery to these vanishings, the slack wire search and rescue teams efforts is what resulted in any of the lost (MEL & OTHERS) from being found. The critics will claim that the authorities are inept and that is why years after the vanishings no clothes and bones have been found of the lost.  NO MATTER what the skeptics write or think, it is a fact that the area when these vanishing have happened is heavily traveled forest quadrants.  The Pecos Triangle is heavily hunted, the place is criss crossed by hiking and bike trails, as well as old logging and wild west roads.  Below is a photo demonstrating what I  mean, the area superficially looks imposing and one can get lost for a while but eventually one will come across a field, a trail or a road.  Or even a cabin. This is an old pioneer road that leads to an old mine and ruins of an old homestead and roads that lead to contemporary houses and cabins. 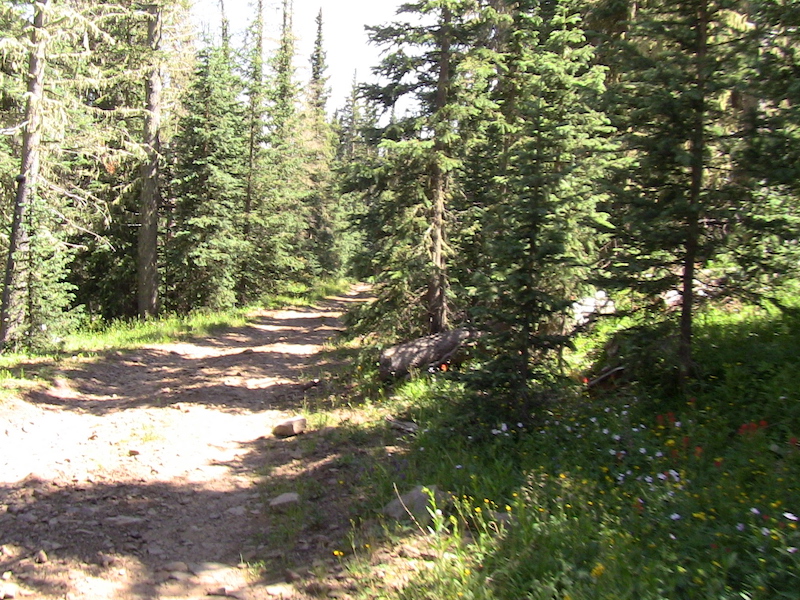 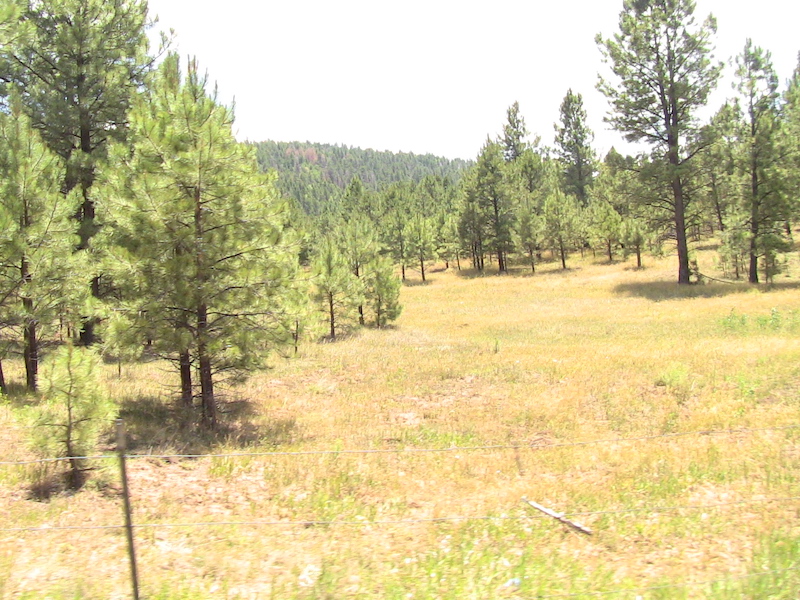 ON the day of my last search in the Pecos Triangle I did not expect to see anybody past the metal coral area, due to the monsoon rains that hit the area the day before. Yet at the top of the peak where the REPEATER is, there was a Indian on his 4 wheeler and later on I passed a female  jogger headed in the direction for the REPEATER.  In other words, how can no clues be turned up, the place is not the trackless CONGO JUNGLE.  Case and point below, PECOS, in the Pecos area one does find high points to navigate from or be found, or clearings on the slopes or fields that are intersected by streams or creeks. 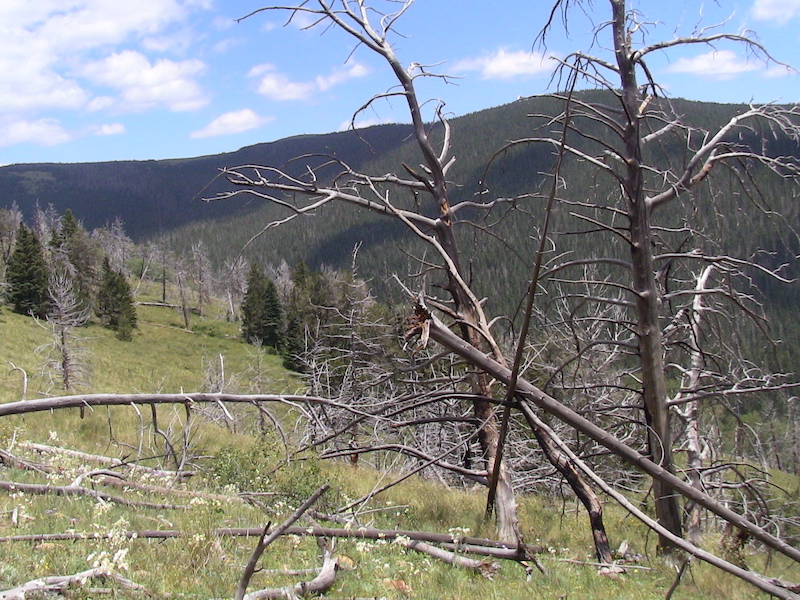 BELOW: IF Mel had gotten lost and somehow missed the searchers and got back onto the road he came up on, he would have passed this and other picnic areas... There are people in this area, be it in tents cabins, or trailers.  And again no matter which way Mel headed he is going to run into a trail, a road, a cabin and people. 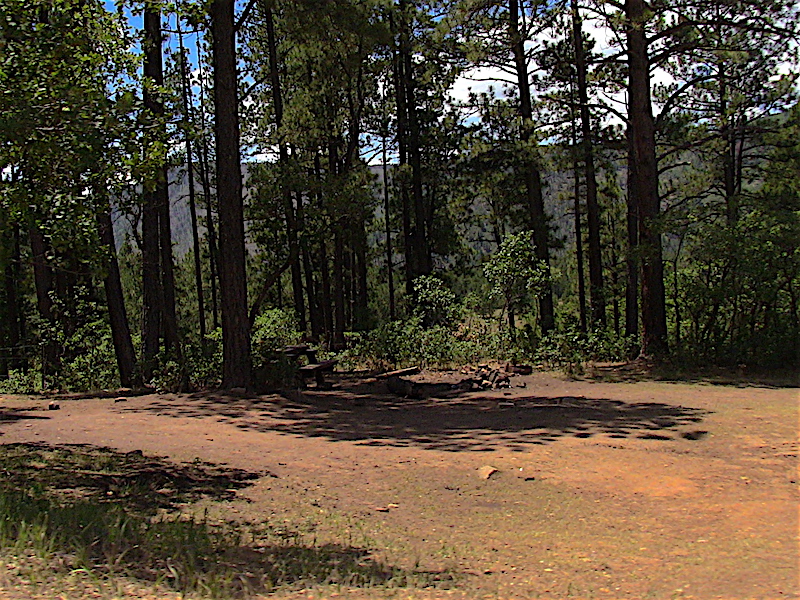 Once a better map is found will post it.  This is a poor map of Pecos and the roads in the area, there are many more.  On the map to the right of COWLES is the area where Mel went missing. The road going up to Elk Mountains not shown nor are the trails and other roads that are found in that tract.

Another oddity --- in the MALPAIS area by GRANTS NEW MEXICO, people go missing as well. (I SHALL BE POSTING INFO ON THIS IN THE FUTURE).  The mystery in the MALPAIS  is as curious as what is happening in the PECOS TRIANGLE . For example the remains of two people lost in the area, (FATHER AND DAUGHTER - THE CHAPMANS) are found months later in a location that was previously scoured by searchers.  How is this possible?  In New Mexico, the MALPAIS area and  PECOS TRIANGLE, things occur that make no sense.  Below is a video that according to the WEIRD BEARDS shows a portals or stargate.  The nay sayers will say it the trail or ripple effect of a rocket at night, as in a rocket gone wrong, a hoax.  This video along iwth the others were posted because strange lights have been seen in the PECOS area and East of Santa Fe that can not be explained. In 2013 a small spiral was scene but no film recorded it, on the edge area of the Triangle. Is it possible that these vanishings are linked to something unworldly as in UFO or other world (POSSIBLY DIMENSIONAL) type doorways?   At the below 52 second mark look at how the spiral  opens up. Is something like this somehow linked to the Pecos vanished?

BELOW: UFO video, for the nay sayers.  Yes, there is something out there, not of this planet.

Below = videos concerning the BENNINGTON TRIANGLE as mention at the top of this page.  Is there any link between the PECOS TRIANGLE  and the BENNINGTON mystery, if so let me know.  How can people just vanish?  I do not think a YETI or BIG FOOT creature is responsible for the missing in PECOS, it is possible that  the missing did see some type of shapeshifter or were lured or scared towards a certain spot.  However, no tracks of any type of YETI or BIGFOOT were found in the areas where people in PECOS have disappeared. Let me make this clear, I do not think SASQUATCH exists, as in a creature that lives on Earth or is of Earth origin. I presume what has been seen in the past that has been identified as a SKUNK APE - SASQUATCH is some type of shapeshifting entity from parts UNKNOWN.  Furthermore, I claim that most BOGGEY CREEK MONSTER type sightings are hoaxes, lies, misidentified bears or hobos.  SASQUATCH I dare say is some is a SKIN WALKER with is a dangerous shapeshifter that has been seen or reported in the 4 corners area of NEW MEXICO.. Back to the missing in the Bennington area -- BELOW.