The poor man had taken a tremendous blow to the head.  Never the less, the authorities claimed that Slobidin had died from hypothermia.

The other four members of the party were found about 80 yards from the makeshift campfire in a gully area.

Dubinia and Zolotarev had fractured ribs. What is odd about Zolotarev, is that he left the tent with very little clothes on, but he did take his camera with him. Was Zolotarev insane, why did the man rush out into the freezing night improperly clothed, but he took his camera with him. NO HE WAS NOT INSANE!  What did Zolotarev want to show to the world? He obviously wanted to leave the world a message by way of his camera.

DYATLOVPASSMYSTERY / DYATLOV PASS MYSTERY -- AL PACHECOS SANTA FE GHOST TOURS -- FEATURES TOPICS SIMILAR TO THIS -- TO BOOK A TOUR OR GET HIM ON YORU RADIO SHOW 505-986-5002 or santafewriter@me.com

One of the oddities of this tragedy is the last picture that was taken before the group met their fate, or perhaps it is the last picture that was released by the Soviet authorities concerning what the group met up with?  BELOW: The novella reprints of 1951 of "WHO GOES THERE" a.k.a. "THE THING" has a similar book cover and so does the modern movie poster as in the illustration versus the mysterious photo that was taken by the group, in 1959.  My question is, was this photo taken as the group of nine scrambled out of their tent or was the photo taken by the tree line after the hikers had fled the basecamp? 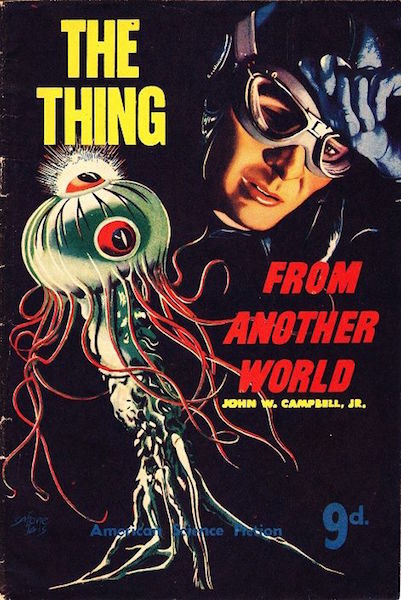 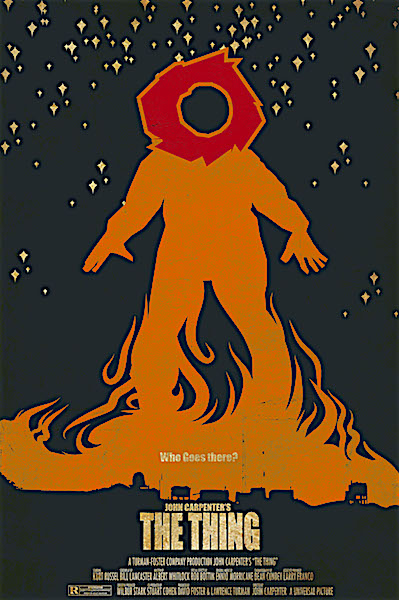 Below are some photos of what was found-- there is one picture of one of the dead, the other pictures were very ghastly--- do they were not posted--- REST IN PEACE--DYATLOV GROUP...

CLICK HERE = PICTURES OF WHAT WAS FOUND AT THE SCENE OF THIS DISASTER--- BE WARNED!!! THESE ARE PICTURE --- OF THE SLAIN - THE DEAD. THEY ARE EQUAL TO WHAT ONE WOULD FIND IN A HISTORY BOOK OF WWII...  MAYBE THERE IS A CLUE IN THESE PHOTOS THAT I HAVE MISSED, AS IN WHAT RUBBED OUT THIS GROUP OF HIKERS got a theory or evidence let ALLAN know

PART II = PHOTOS OF BEFORE & AFTER THE TRAGEDY... PICTURES OF THE GROUP HAVING A FUN TIME AND SNAPSHOTS OF WHAT THE RESCUE PARTY FOUND...

What happened at Dyatlov is like something out of a screenplay, "THE THING 1982", as in how could these experienced, hardy people meet with death in such brutal manner?  What happened at the tent, why did they escape into the cold not bundled up, why did they rip their way out of the tent?  Then again, are the authorities correct in that the tent was cut from the inside, or did something try to rip its way into the tent? 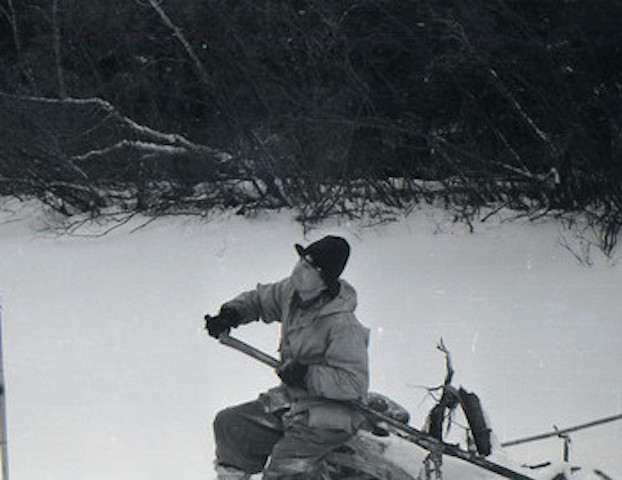 ABOVE & BELOW: One of the Dyatlov people, I always linked this fellow to the WWII picture below, as in the slight resemblance and awareness in both photos. Below -- WWII combat near KIEV 1943 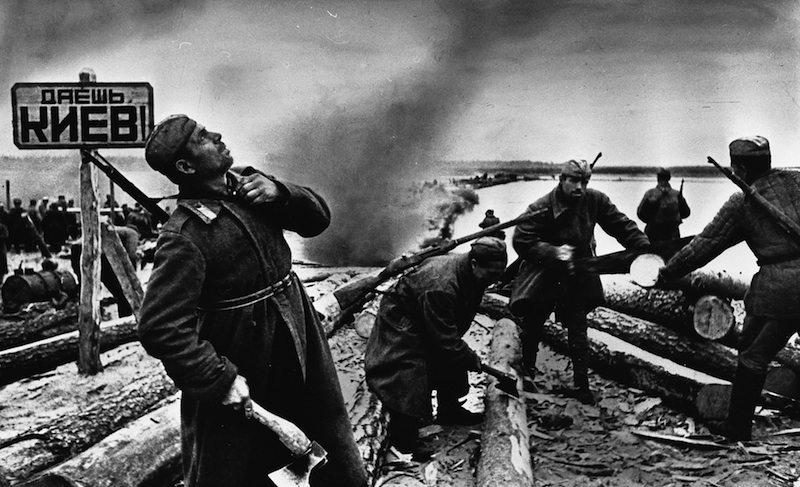 Above and Below: A tad of a resemblance... Above combat on the Dniester 1943, Russian Front. 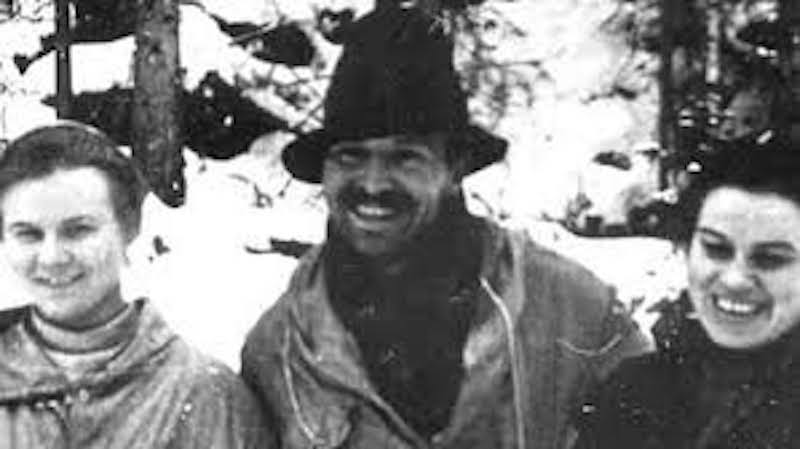 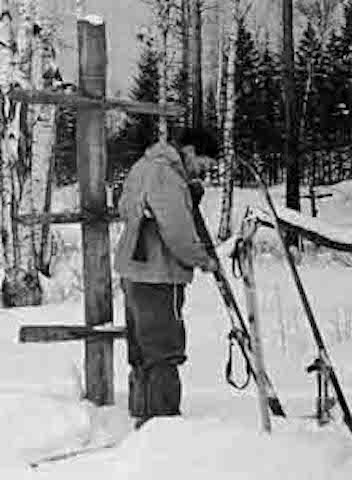 IS there any other similar story -- not fake -- of a group of experienced pioneers -- hikers -- adventurers - having a grand time in the wilds - then they get wiped out with out a clue? 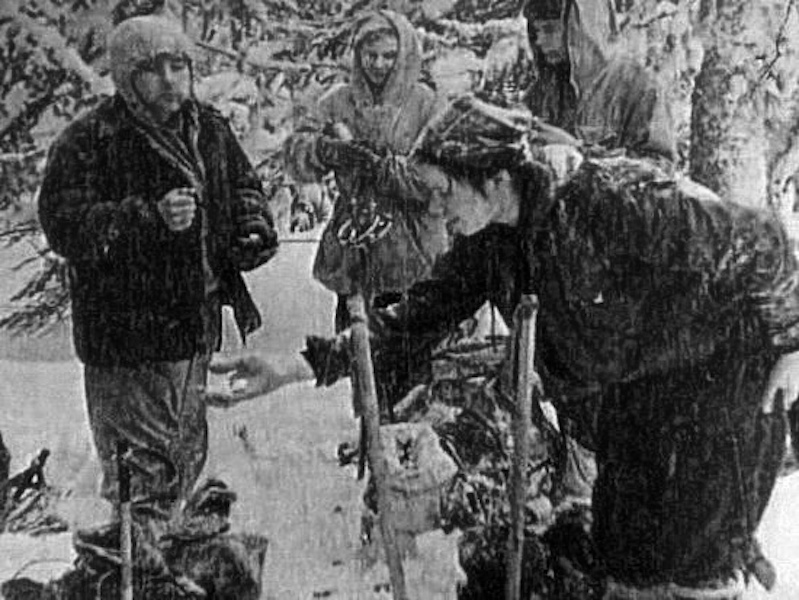 There is no indication that there was any trouble brewing amongst the group.  The only ominous signal in the film and journal is the line about SNOW MEN plus the odd photo of what looks like a ? behind the group, peering at them.  SO what befell these hardy adventures, were they attacked by a SHAPESHIFTER-YETI or ALIEN?  These poor souls in the above picture were soon to die a terrible death. 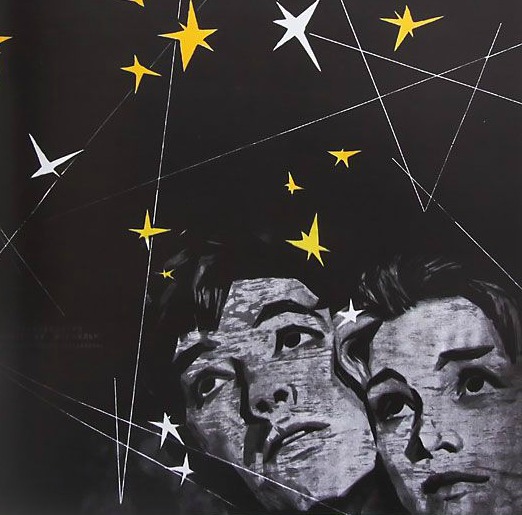 DYATLOV INCIDENT -- DID DEATH COME FROM THE STARS?  WHAT KILLED THESE PEOPLE -- OR WHAT MURDERED THESE SKIERS?

If anybody has info from Russia on this mystery send it to this website... santafewriter@me.com

Below on the first link -- in Pecos New Mexico, people have disappeared without a trace, is there some link to what happened at Dyatlov or is the cattle mutilation phenomena more in line with what happened to those poor souls who perished in 1959? 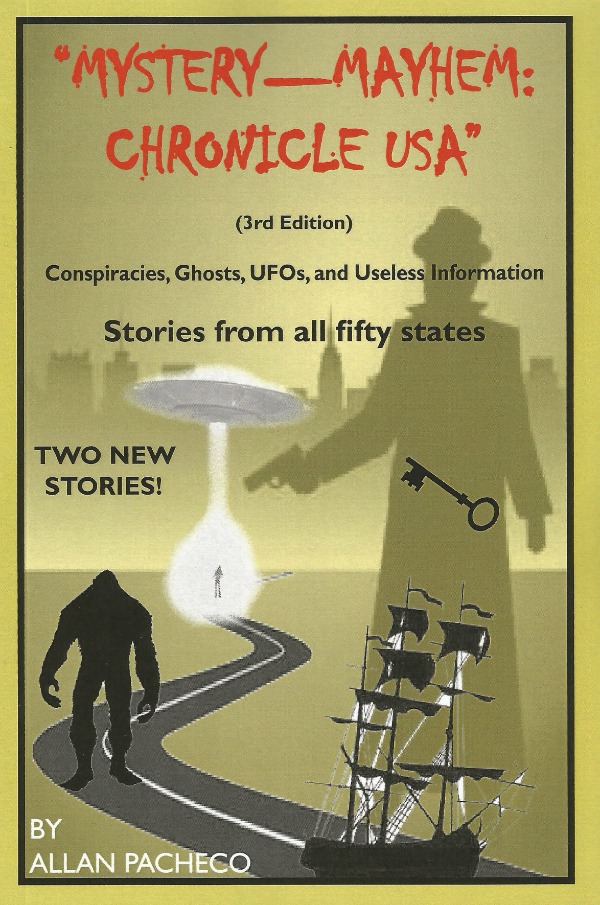 TO ORDER "MYSTERY-MAYHEM: CHRONICLE USA" CLICK HERE---- THIS BOOK WILL MAKE YOU THINK! 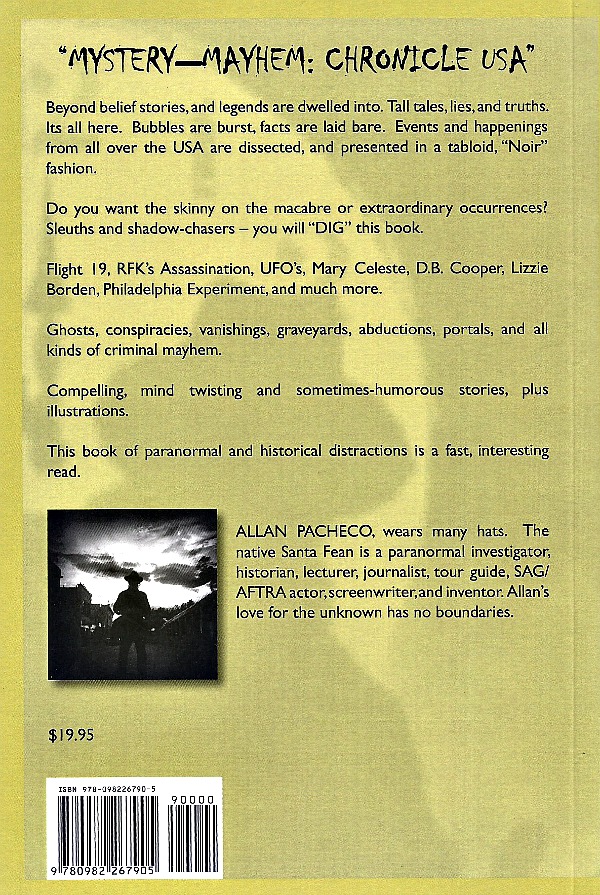 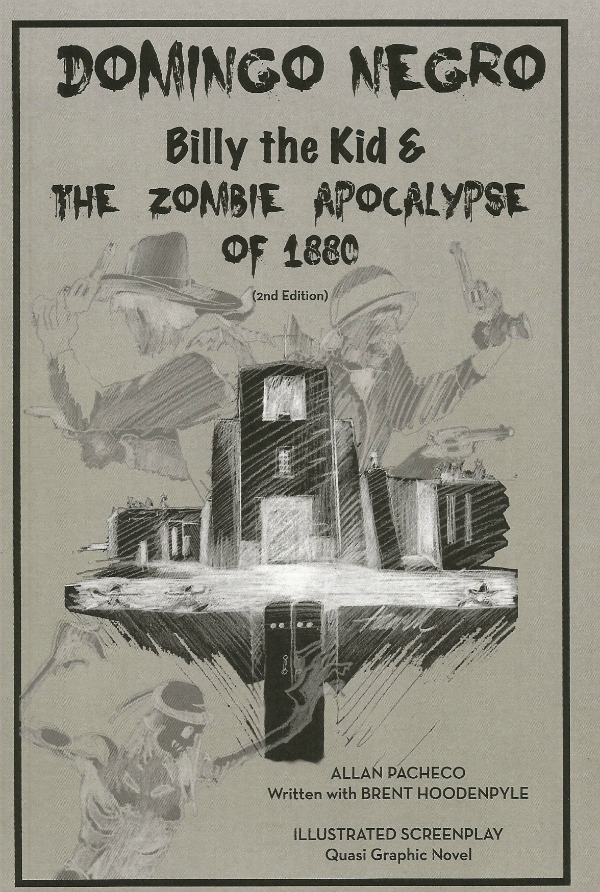 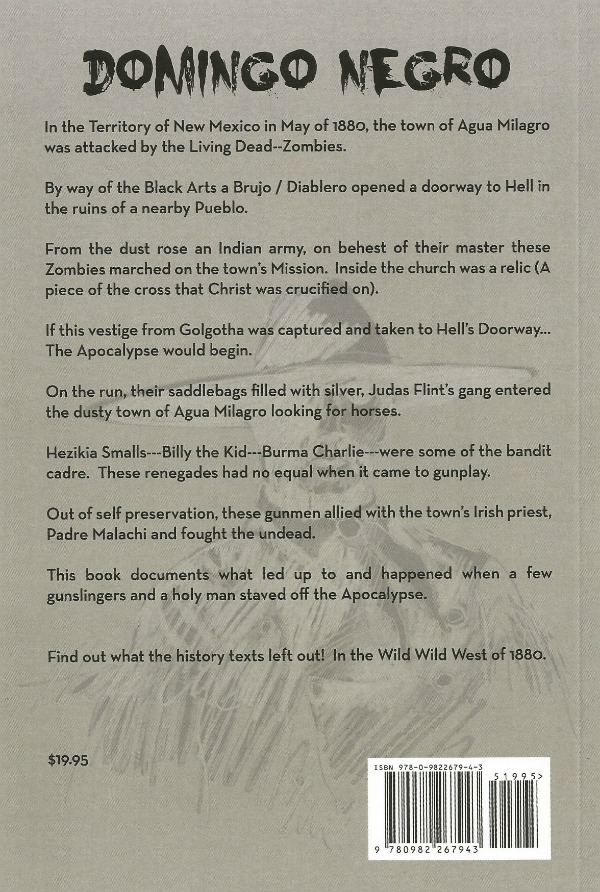 TO ORDER BOOKS OR GET  INFO ON ALLAN's TOURS-- CLICK HERE 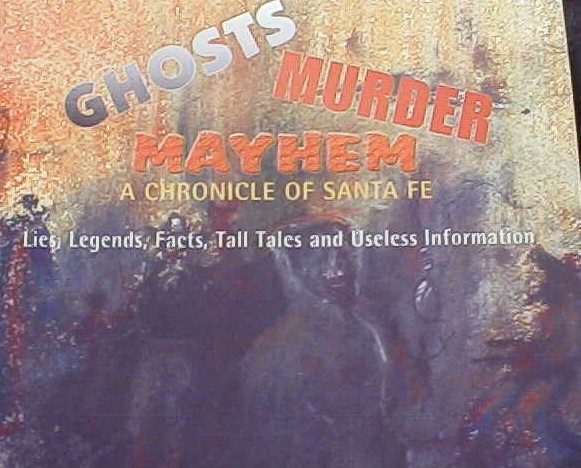