Burro Alley is located west of the Plaza, the lane is a historical landmark and at times some paranormal activity has been seen on this wild west road.  Below are some photos from some of Allan Pacheco's tours. 505-986-5002 or 505-231-1336 schedule a tour. 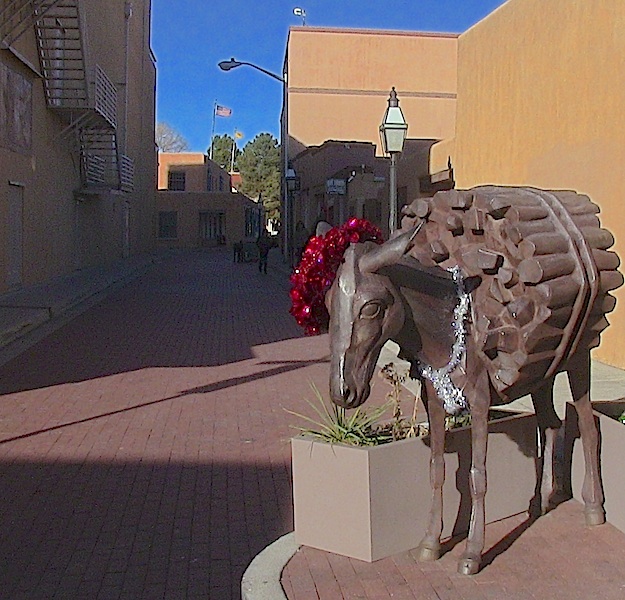 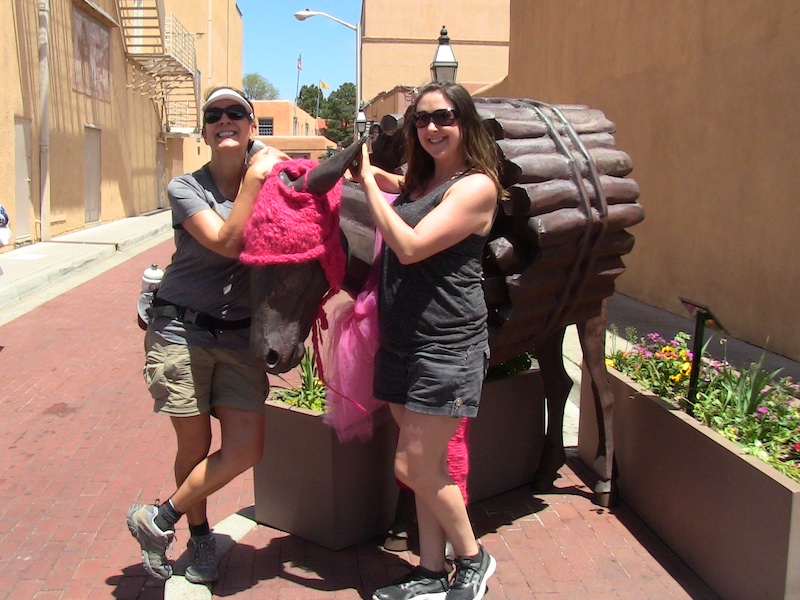 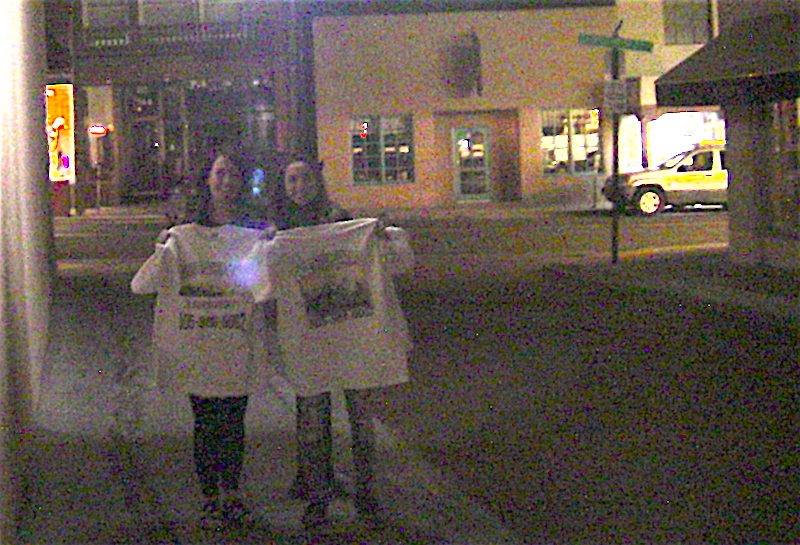 As new residents of Santa Fe, we are interested in learning more about the city and it's history so we decided on a walking tour. Since it was Oct, we opted for a ghost tour. Joined by a friend who has been in Santa Fe for 30 years, we thought we'd have the best of both worlds (not knowing how long Allan had lived here). Reasonably so, our long time resident/friend was suspending her disbelief to see how much the guide knew.
I can only say, as will the others in our group, - the breadth of Allan's knowledge is beyond impressive. Not only could he speak to the history of Santa Fe but to many other facets of the city's background & development. When we booked the tour, I had no idea we selected someone who must be (if he's not already) considered an expert in what he does. Having crossed paths with another tour, the difference between the two was staggering! Thankfully the ranking on TripAdvisor helped us make the right decision.
Allan is entertaining, knowledgeable, honest, easy to schedule and reasonably priced for a private tour. If you're considering a walking tour, THIS is the one you want!! 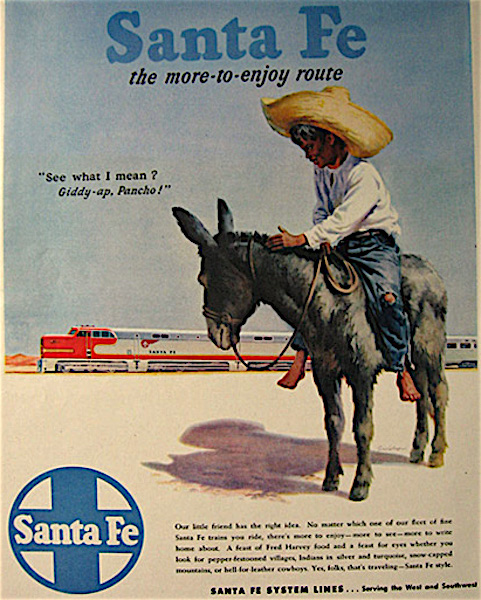 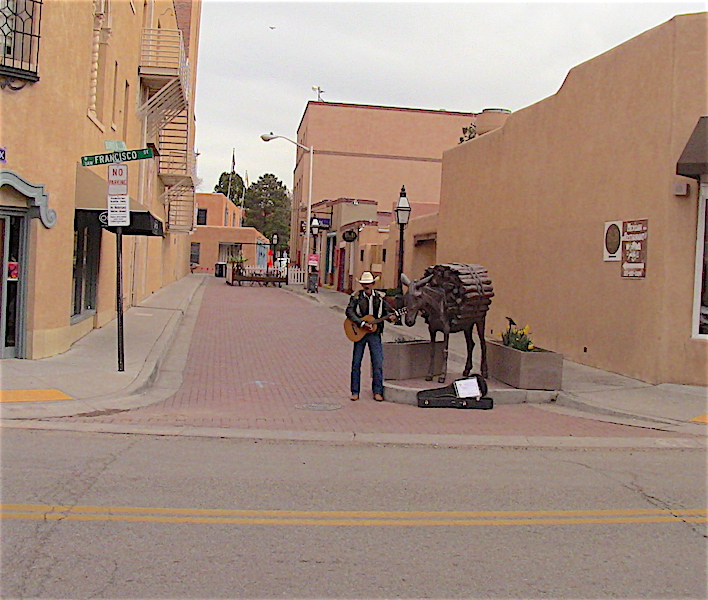 BURRO-ALLEY-SANTA-FE-NEW-MEXICO   After the troubadour finishes his AY-YI-YI song, -- the good guys and bad guys go for their pistols -- below! 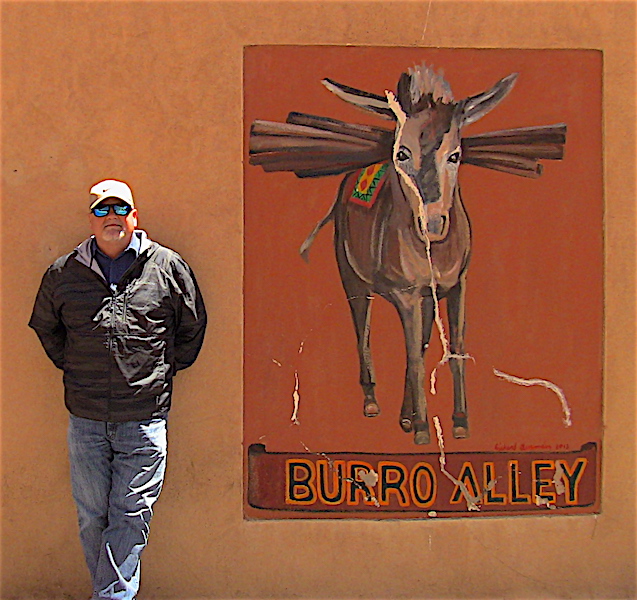 Burro Alley is one of Santa fe's wild west lanes, all kinds of mayhem happened on this street.  Pistoleros, thieves, venders, this was their street.  Lynching, gunfights, you name it --- it happened on this historic and haunted bricked road.  Below on different history treks, Allan's tourists go for their guns! 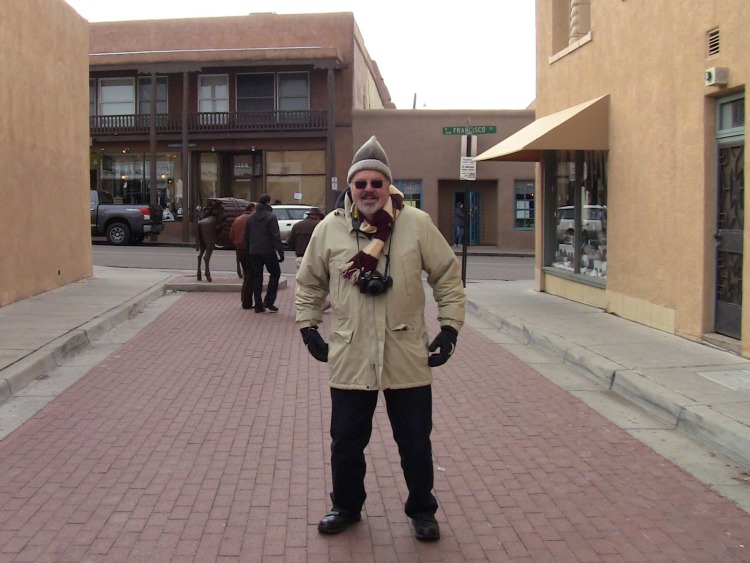 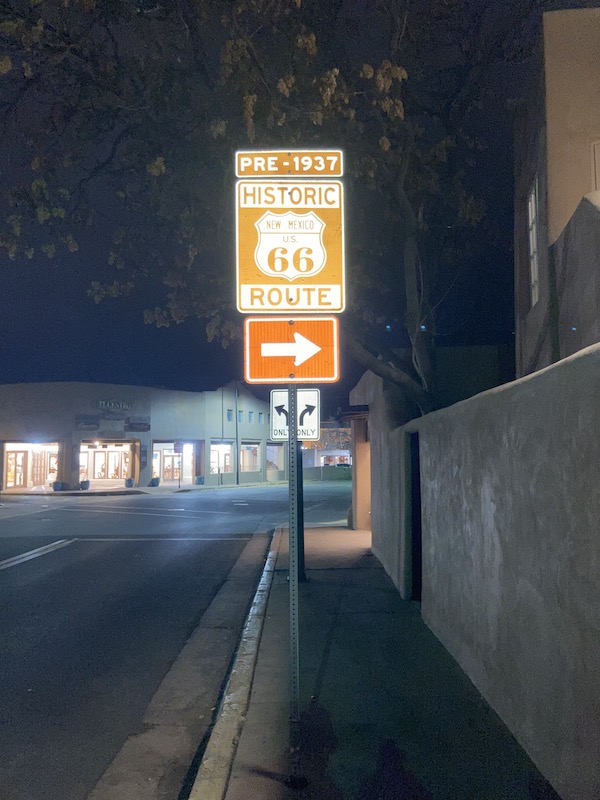 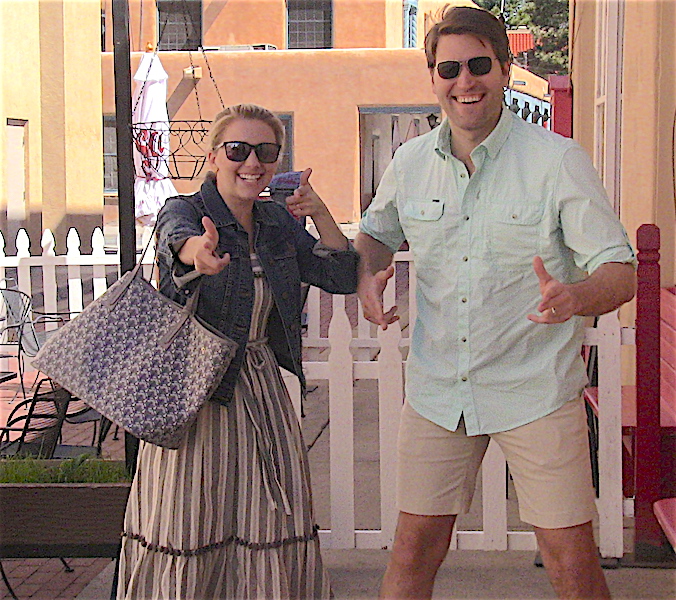 ABOVE & BELOW: THIS TOWN AINT BIG ENOUGH, DRAW!  Some trivia-- the lady Above is a doctor and her last name is HOLIDAY! Yes, that is DOC HOLIDAY DRAWING!  NOT INTERESTED IN HISTORY OR GHOSTS,  CLICK HERE -- UFO -- THE MYSTERIANS 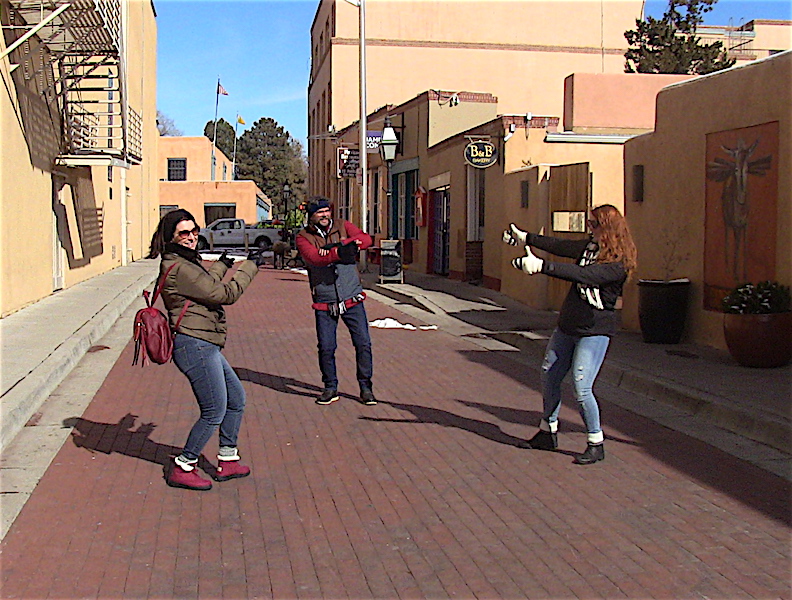 Next to Burro Alley on its West Side is the Lensic theater it has been remodeled countless times.  The above photo the Lensic is to the right of the father and Son cowboys... In 1968 the film, "Hang em" High was shown at the Lensic, the movie was filmed west of Santa Fe, on location... The film was very popular and was held over a number of weeks end of summer through Fiesta days... (mid August through early September).   The hanging effigies were a popular attraction, people would come to the Lensic and see the  dangling.  It was an eye catcher, the critics clam the promotion for the flick was a vile add that played to the perversity of the American mind.  Maybe so, maybe not, tour guide Allan visited the Lensic a few times bak in 1968 to see the DANGLING.  Allan thought it was a clever ploy that brought people to see the film and capitalized on Santa Fe's  wild west history.... One night during the 1968 Fiesta, revelers became to rowdy, this was before there was any plaza curfew and blue laws were rarely enforced.  (SANTA FE LORE has it that is the disclaimer so nobody gets in trouble for the 1968 mayhem -wink -wink) One of the dangling dummies was cut down one night by some Fiesta goers and thrashed, the effigy was then hung at different places around the Santa Fe downtown area. The other dangling straw man was left alone and it hung there until the movie closed out. During Wild West days, santa Fe did have lynchings and the area around Burro Alley is loaded with stories, historic and paranormal haps.  Go on Allan's HISTORY TOUR or GHOST TOUR and learn about SANTA FE SECRETS as in SANTA FE DIMENSIONS -- PARANORMAL ACTIVITY.  505-986-5002 or 505-231-1336 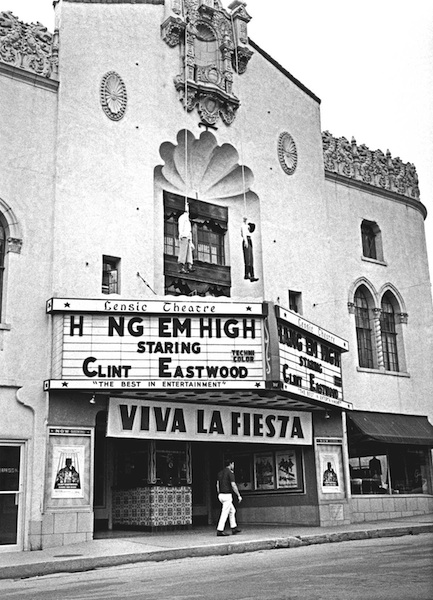 Like "GOOD" Western Art? Click here and see my buddy's works -- RON KIL.  The man captures the flavor of the Wild West and classic Western films. 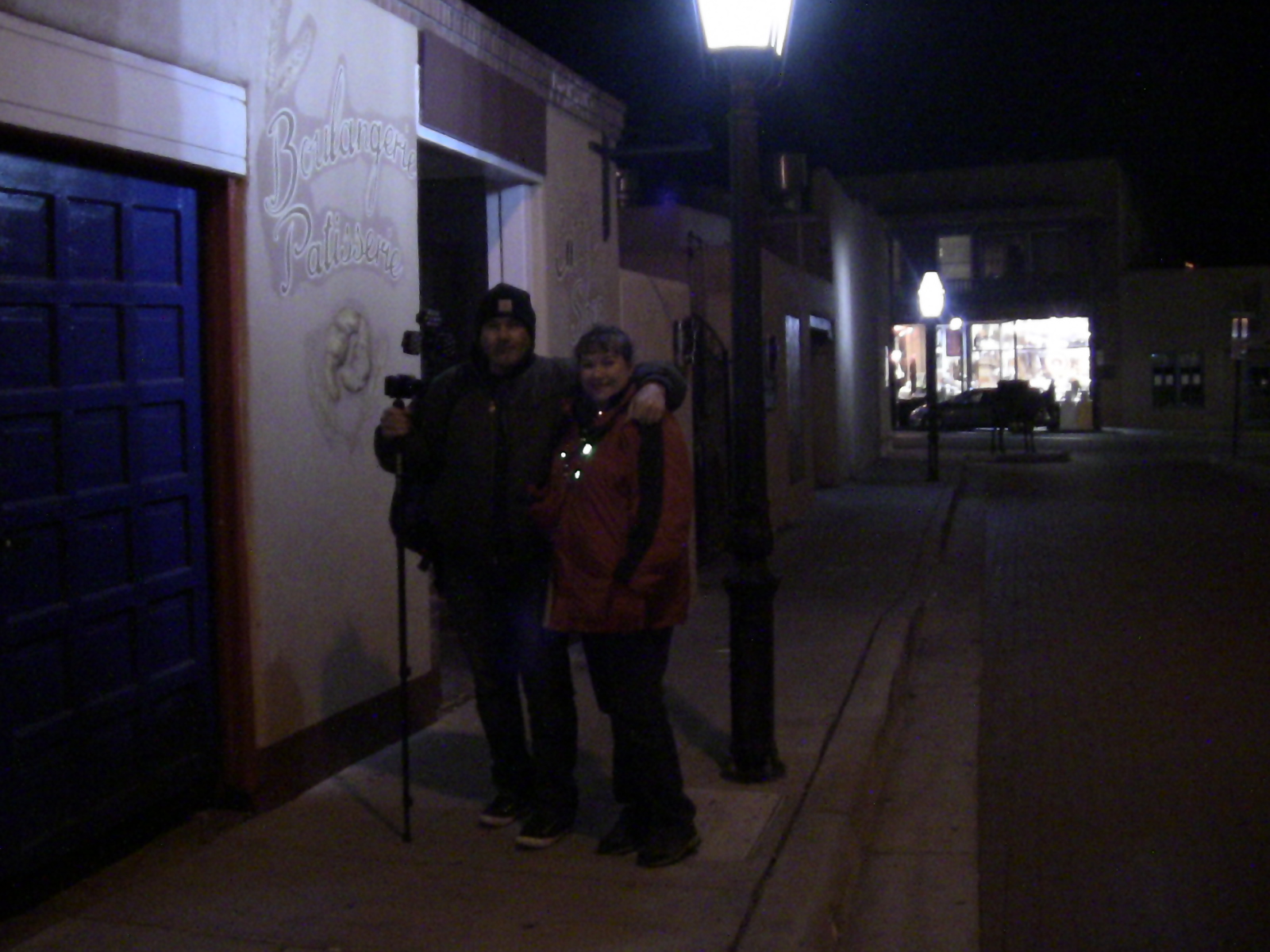 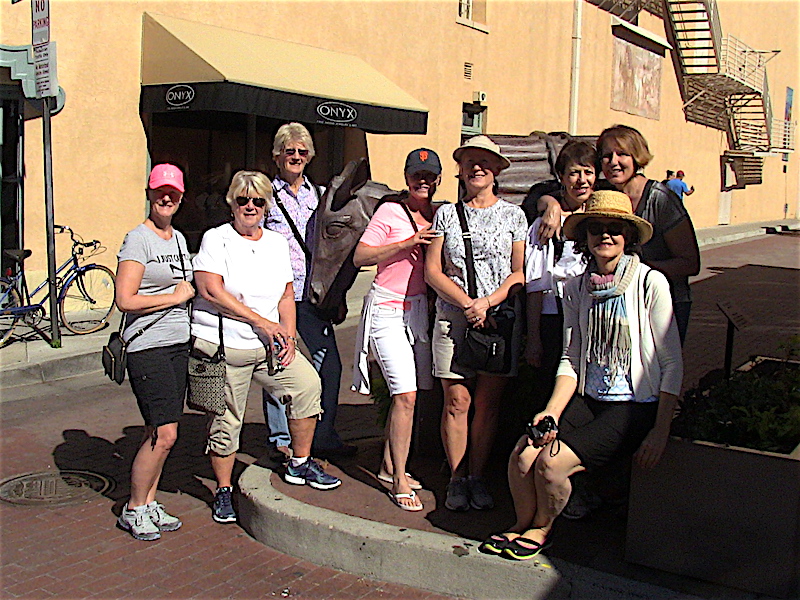 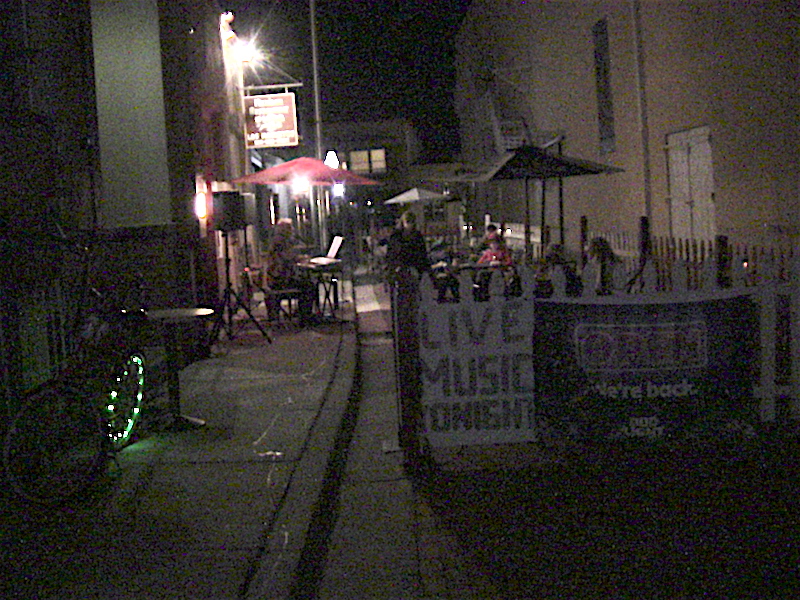 BELOW: A burro is behind these ladies, who took Allan's tour. 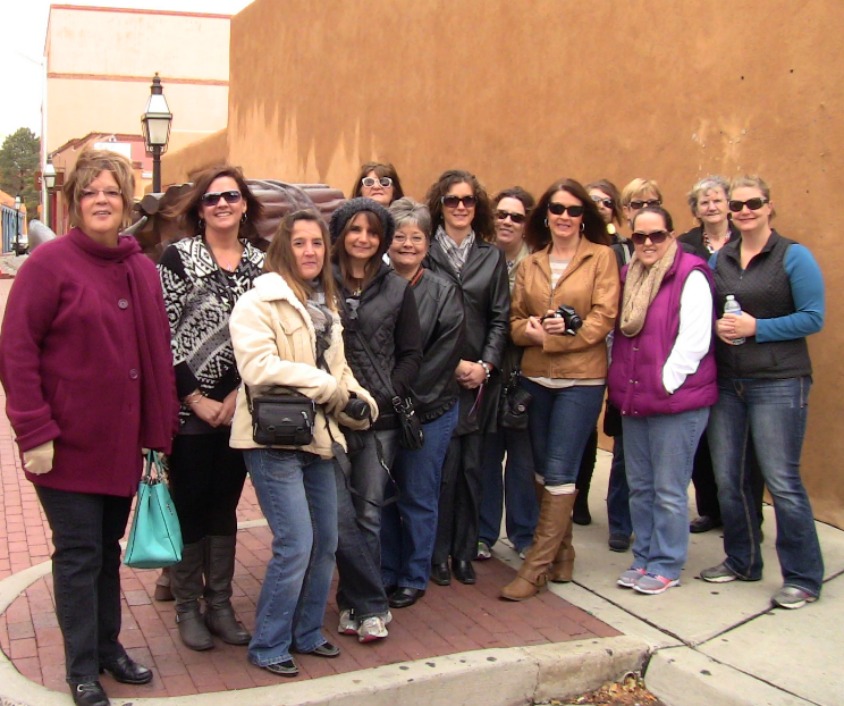 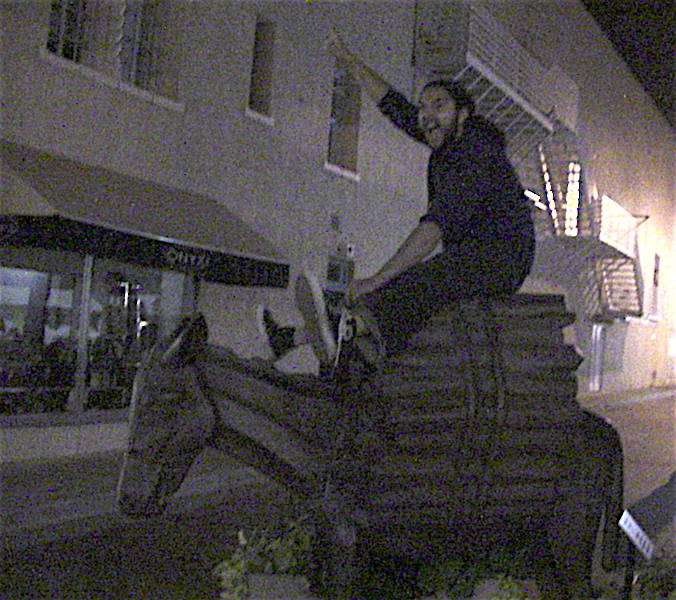 It has been put forth that BURRO ALLEY was the inspiration for the showdown scene in the 1970 film "KELLY's HEROES". What is fact, Clint Eastwood was in town for the filming of the 1968 film "HANG EM HIGH" which was shot outside of Santa Fe. That film preceded "KELLY's HEROES". Note in the shot BELOW: the lamp post, the alley doors, etc.. Maybe, Burro Alley was the brainstorm of this scene? 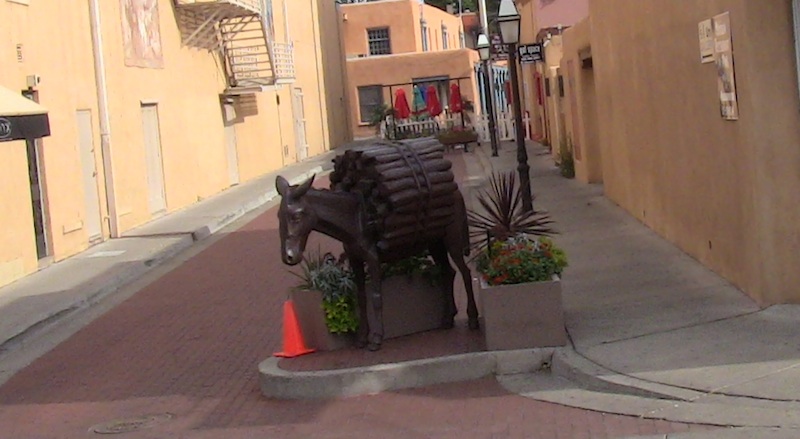 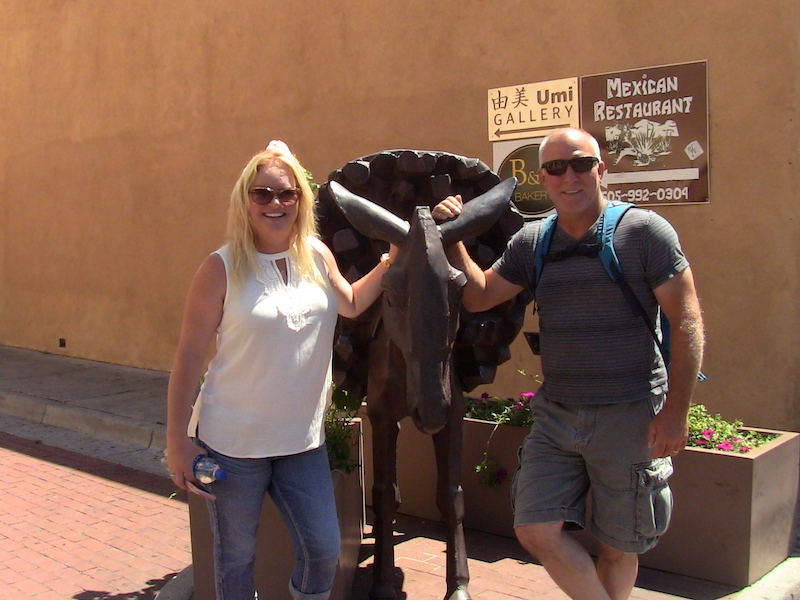