PICTURES THROUGH THE DECADES OF ENERGIES, GHOSTS, LIGHTS, ORBS, AND TOUR GUIDE ALLAN

As in a lasso of paranormal around ALLAN PACHECO

Through the years, Allan has  had all kinds of encounters with energies.  His camera has been knocked from his hands, he has been pushed down.  On other encounters forces  have tried  to disrupt his soul  or physical energy.

That is why  -- one must be in darn good shape and  more importantly be right with BIG G -- GOD --The TRINITY -- THE ANGELS--   protection from evil energies or evil people,  who are  automations of the dark powers.

Your spiritual wall has got to be strong, or bad things can happen, as in taking an unwanted energy, or energies home with you. These vile forces can linger or attach themselves to other weak people in your household.  They can also raise unmitigated Hell in your life, physical, mentally and spiritually.

That is why  protection from HEAVEN ON HIGH is a must if  dark blasts of power are sent your way. 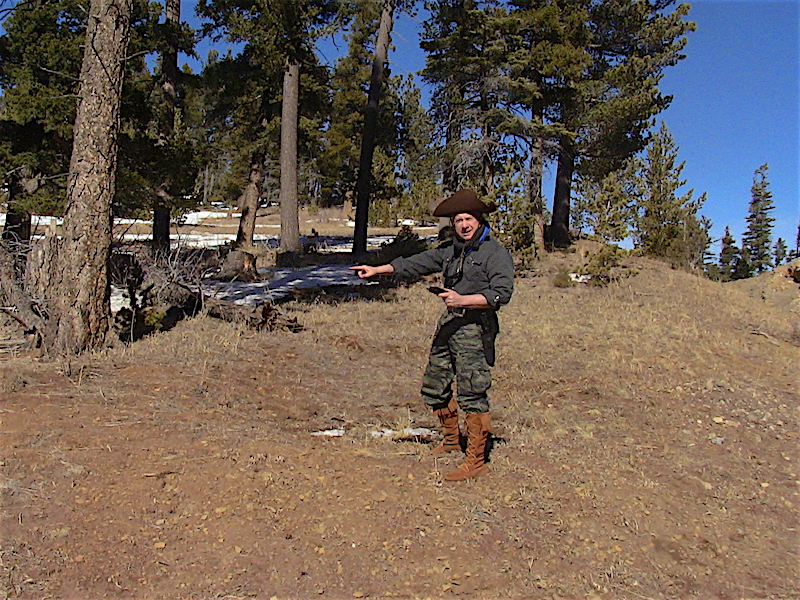 Below -- ages ago, in LA POSADA, which is a haunted mansion, that has been turned into a first class resort.

That is ALLAN on the right, and notice the energy on the left.

IS IT ENERGY MANIFESTed  around a person or is IT JUST RAW POWER showing itself.

Julia's husband was the AL CAPONE of NEW MEXICO TERRITORY.

ALLAN and the ghost of JULIA get a long most of the time, he is respectful of her estate and has empathy for her.
MORE DATA -- PHOTOS -- AL PACHECO's TOURS 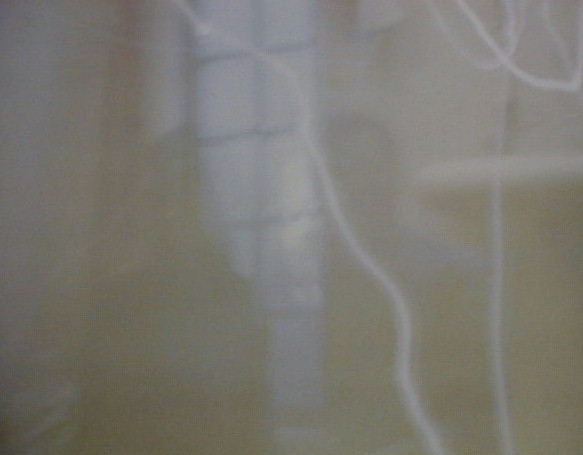 The photo below -- was taken at La Posada in the room where Julia met her fate.  Allan was leading a tour -- energy was felt, and in a certain area of the Julia's bedroom  (slang name - MURDER ROOM) the light was different, people got a different vibe.

Is this the energy of Julia -wrapping around a woman in the tour? OR is this the shade of Julia?

Below is the photo -- but with more area seen. Strange photo.

BELOW--ALLAN PACHECO on tour outside the STAAB SUITE -- ( slang name = MURDER ROOM) on this private tour was the grand daughter of a medicine man --- all kinds of things happened on this safari.

Note the twisting  energy or light around ALLAN,  rather like the above pictures. At times there is a power or powers in LA POSADA. 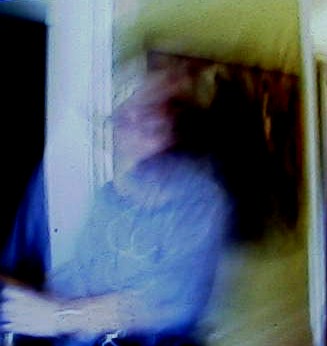 Below are a series of photos -- ALLAN is leading a tour, the group is near a portal or doorway  locale, dowsing rods are being used to pick up energy. Note the two red dots -- or people;  say -- two red werewolf like eyes on ALPacheco''s back. This high strangeness was  noted on tour, other photos were  looked at, the area was examined, it was deemed to be impossible for the WEREWOLF EYES -- to be a trick of light or aperture failure.

WHEN-THE-GHOSTS-GOT-AL-PACHECO --- a.k.a the day the hung  Kid Pacheco.  Look at the two red slanted dots or eyes, they do look rather ominous.  As in the energy of death, the gallows, or just  evil.  Notice in how it looks like there is a face  on Al Pacheco's back.

While this was going on, and afterwards, Allan had  the strangest urge for raw, bloody meat.  He kept smacking his lips. WINK-WINK! What happened in this picture, for one thing,  this area is rife at time with paranormal energy.  Through the centuries all kinds of sighting have  been witnessed in this locale. IT does not matter where the tourist is from, at times, the energy does go after people from all 50 states.  In this case it  targeted ALLAN PACHECO, like never before at this locale. Lets go touring 505-986-5002 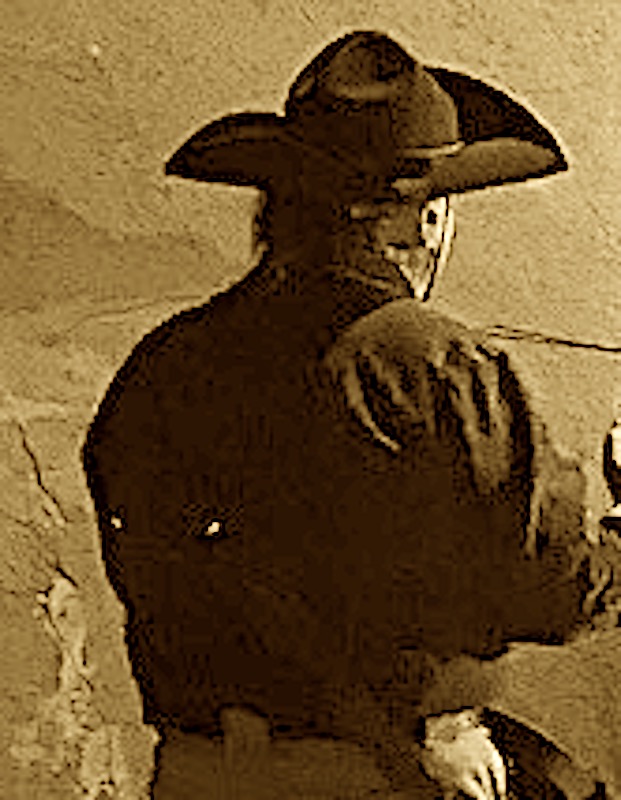 Below --- decades before the above picture was taken, Allan Pacheco was out on an investigation on an area that is laced with paranormal activity and death.  This area is part of the old  closed off  1920s ROUTE 66, locale. All kinds of thing have been detected on ghost meters and have been heard while on investigations. Note the two red eyes on the right side - middle of the snapshot.  IT is as if the big bad wolf is looking out  of the trees.  These two dots, one is darker than the there are very similar to the  eyes, on Allan's back years later.  WHEN-THE-GHOSTS-GOT-AL-PACHECO or when the wolf man or terminator was eyeing ALLAN PACHECO 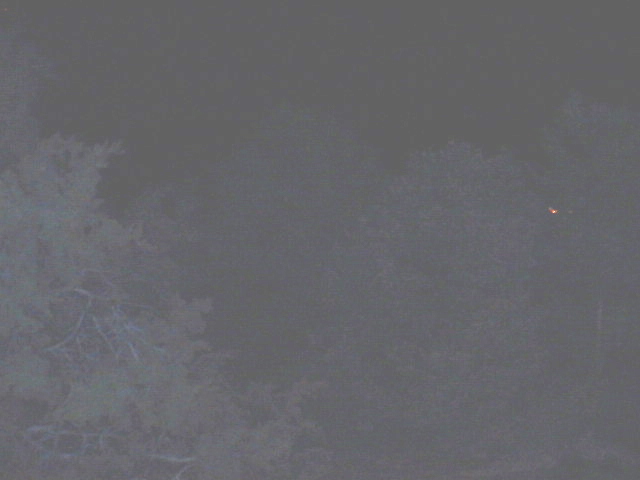 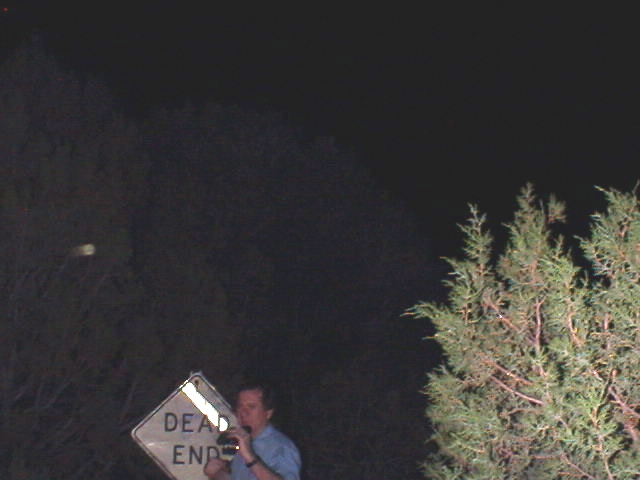 Through the decades -- AL PACHECO has always had problems with trees, TIMBER!  Yes there is an air strike looking for ALLAN, but it not the payload from some F4s, flying out of Da Nang, It is trees, that break and are aimed his way.  Below are some photos. 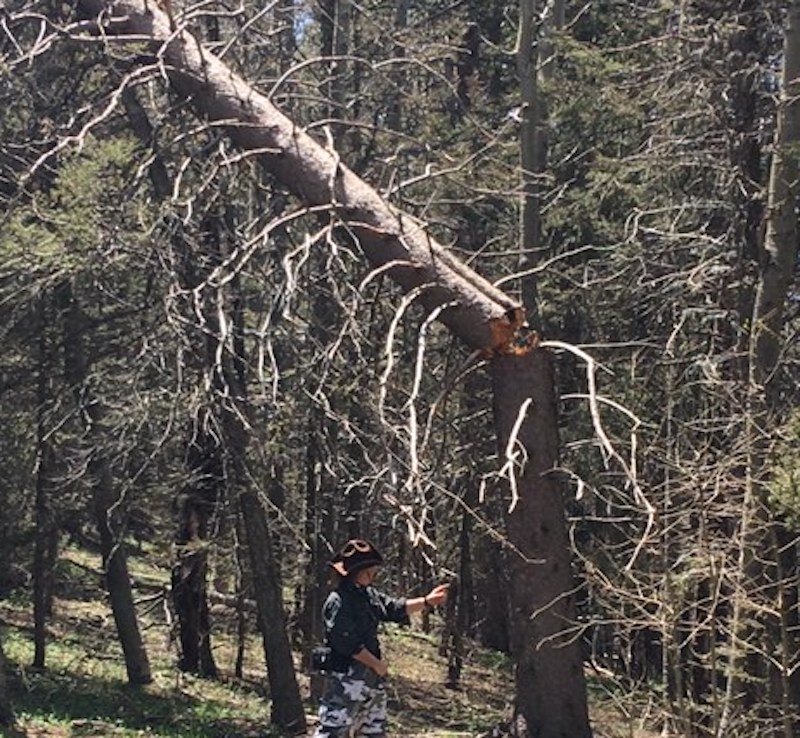 WHEN-THE-GHOSTS-GOT-AL-PACHECO --- the below photos are of a very young ALLAN, right after a THUD. You can see the surprise, as in -- MISSED ME BY THAT MUCH as agent 86 would say on "GET SMART". 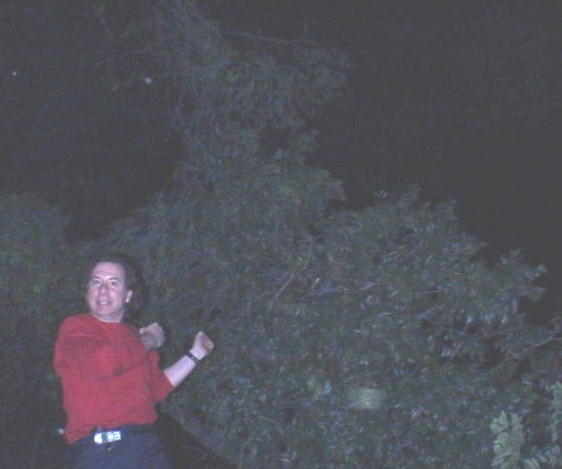 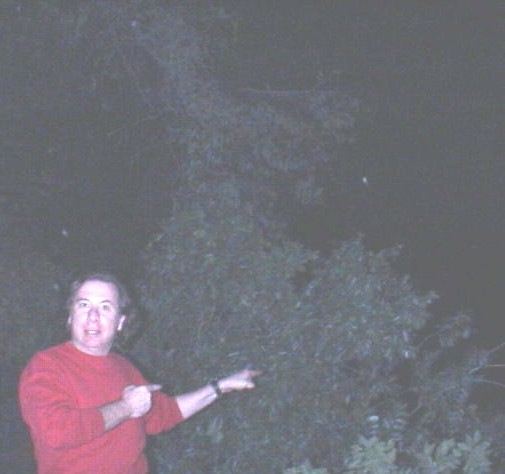 BELOW -- ancient photo -- 1 MILLION YEARS BC -- a very very young Allan on investigation.  This area was full of paranormal activity, note the photo. Also, the area, was loaded with  rattle snakes.  They were out  hunting for rodents, nocturnal creatures in this area.  All kinds of tings happened on that safari.  Yes, contact was made with paranormal energy, this was an investigation in a haunted area close to SANTA FE, outside of MADRID, NM. 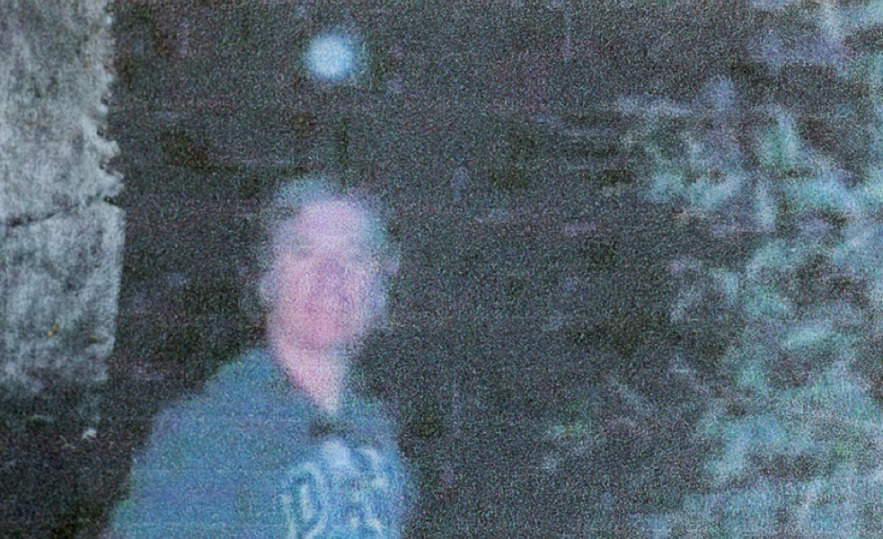 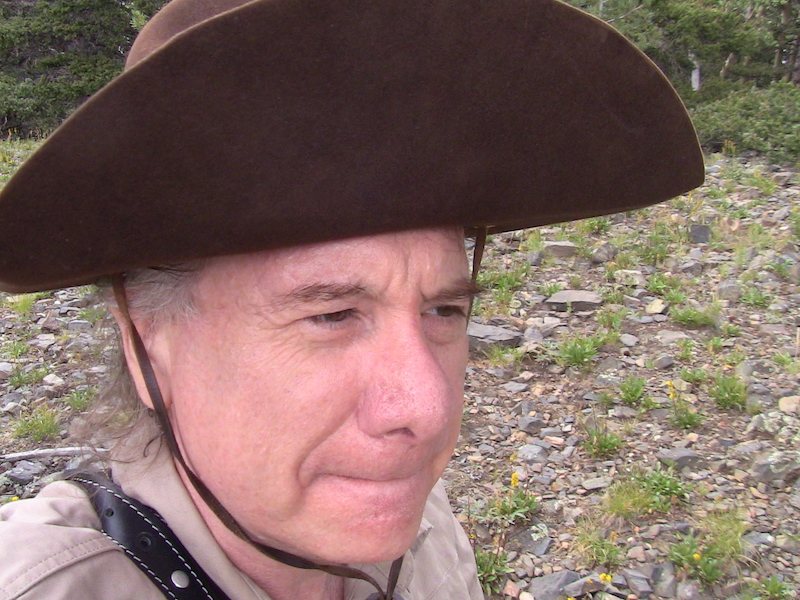 Above -- ON an investigation -- ALLAN is aware --- so the ghosts -- or energies won't get him --- actually he is focused on an area where paranormal  energy has been detected and is on his way to it. Below -- On tour -- and  metaphysical energy is around ALLAN -- yes ALLAN GOT- GOT!  Schedule a tour 505-986-5002 -- People from all over the USA have taken his tours.  BELOW --- ALLAN leading a tour -- down a historically haunted SANTA FE lane, the snapshot does not make sense. Above  his sombrero that is not a tree there is no tree there, what is it?  Ghosty energy, trick of light, a Djinn?

WHEN-THE-GHOSTS-GOT-AL-PACHECO   what is that above  ALLAN, below are some  blowups of that area of the photo. 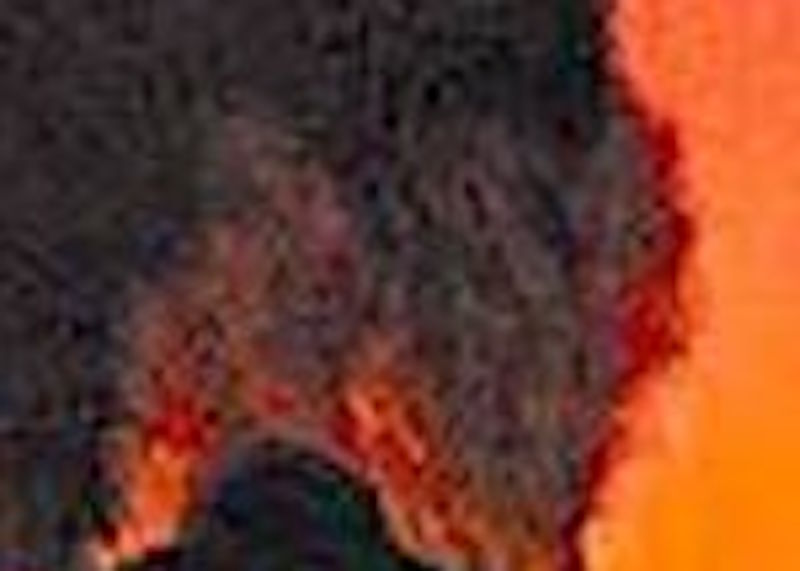 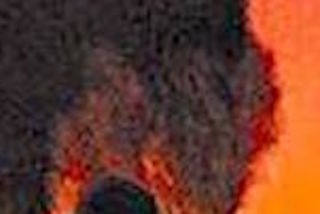 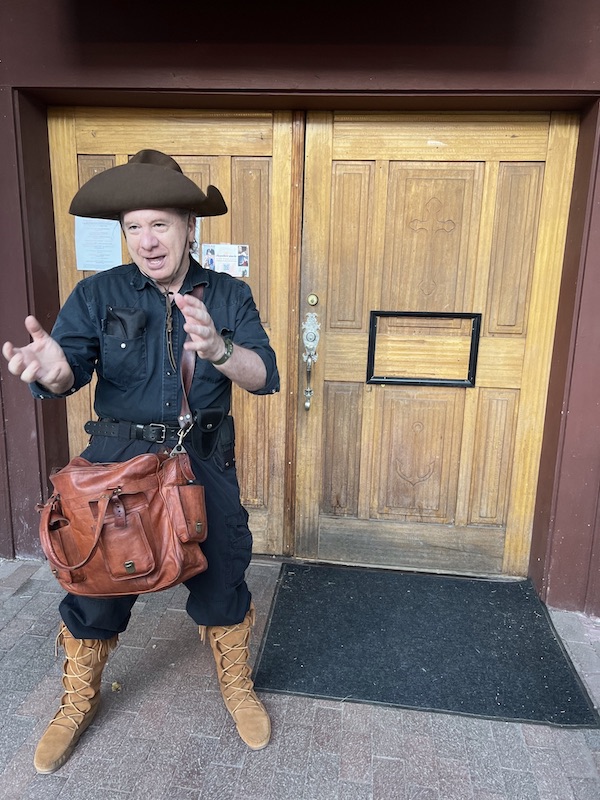 Above this is NOT a picture of your tour guide describing     WHEN-THE-GHOSTS-GOT-AL-PACHECO    NOoooo.  This is Allan in front of a haunted entrance  at a landmark, explaining what the energy can be like at night.  One wag has is, that A.P. was mimicking  the lead singer ROLAND GIFT from  the group THE FINE YOUNG CANNIBALS -- singing SUSPICIOUS MINDS.  IN any case -- AL PACHECO has better poses than  ROLAND -- take a look below  as ROLAND busts a move.

PARANORMAL PODCAST WITH AL PACHECO --- THE MERCURY THEATRE OF MYSTERY