WARNING -- PHOTOS = TO WHAT ONE WOULD FIND IN A WORLD WAR II HISTORY BOOK -- CONCERNING BATTLEFIELDS --- PHOTOS DETAIL WHAT WAS FOUND AT THE DYATLOV CAMP BY THE RESCUE PARTY. WHAT CAUSED THE CARNAGE?

AT DYATLOV PASS 9 PEOPLE DIED TERRIBLE DEATHS--- THE FOLLOWIG PICTURES ARE BRUTAL, THEY SHOW THE AGONY THAT THE GROUP WENT THROUGH BEFORE LIFE LEFT THEM.   MAYBE THERE IS A CLUE IN THESE PICTURES, IF SO CONTACT ALLAN …    santafewriter@me.com      R.I.P. DYATLOV GROUP 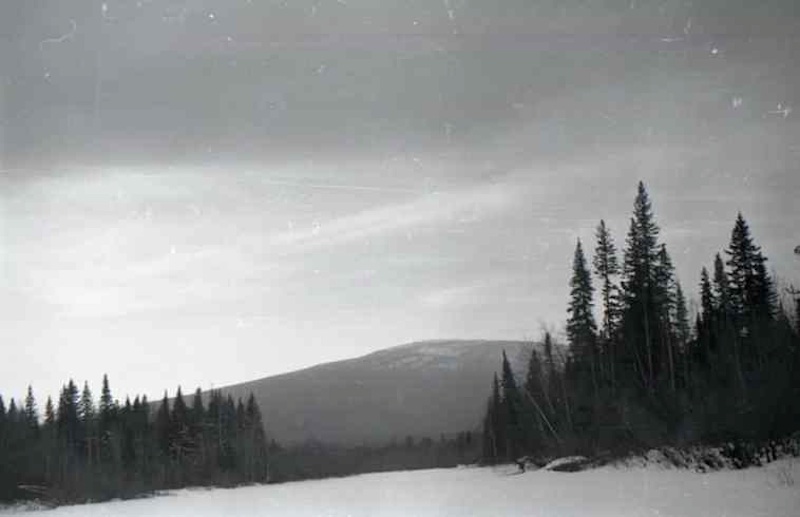 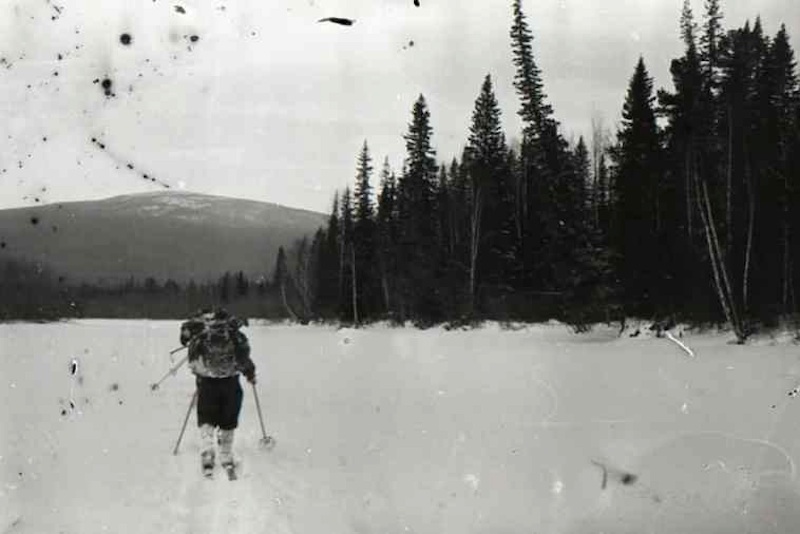 These victims had no idea what was in store for them, here are a few pictures, showing them before they met their terrible death. 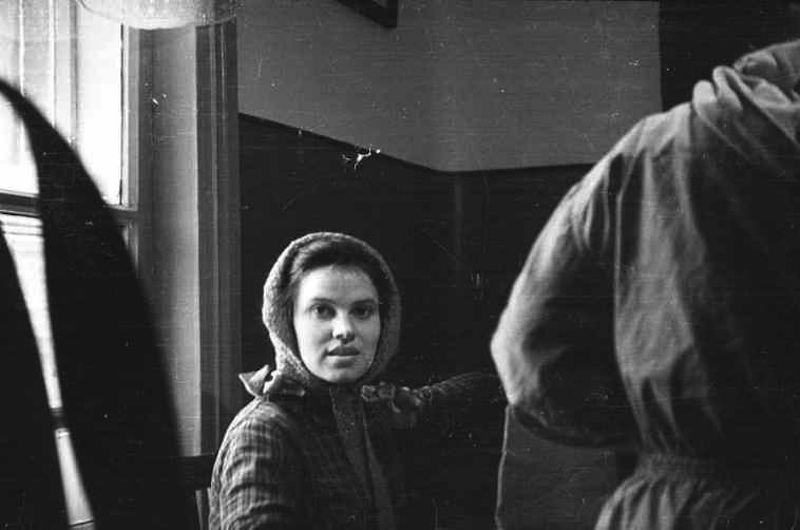 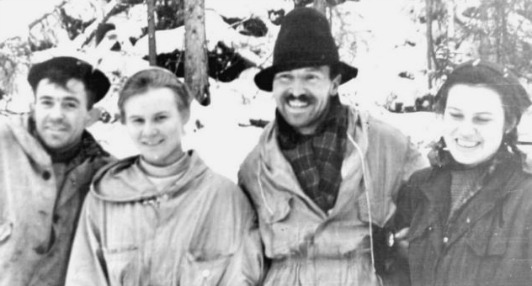 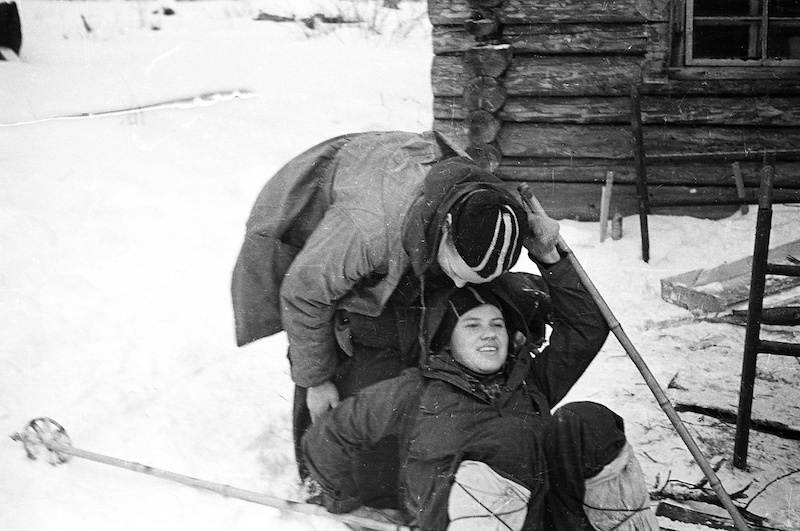 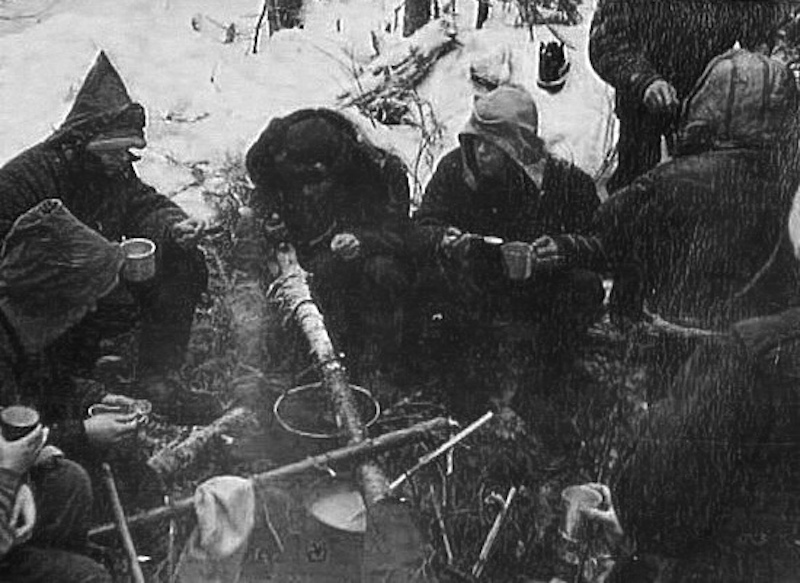 Reader, remember --- this group was made up of PEOPLE who knew the outdoors, they were veteran skiers --- mountaineers...  Yet whatever befell them, negated all of their experience... What could have done this? 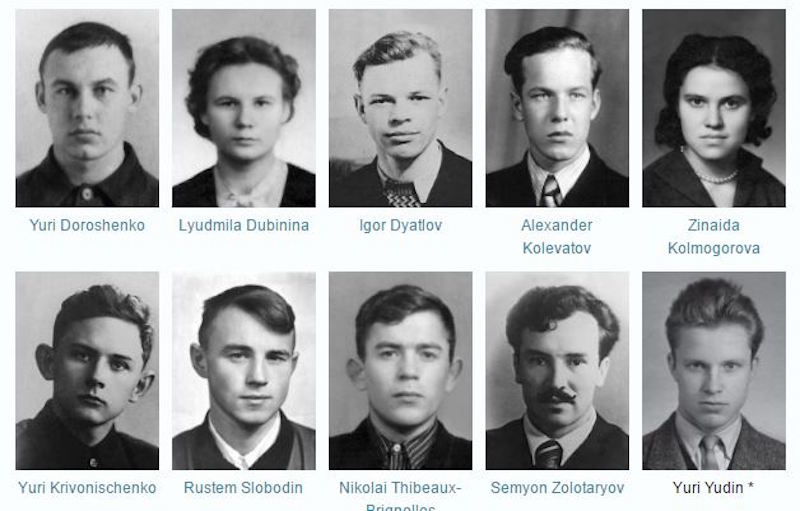 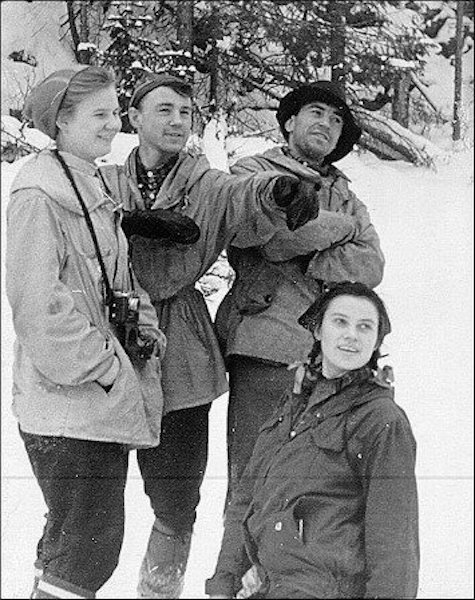 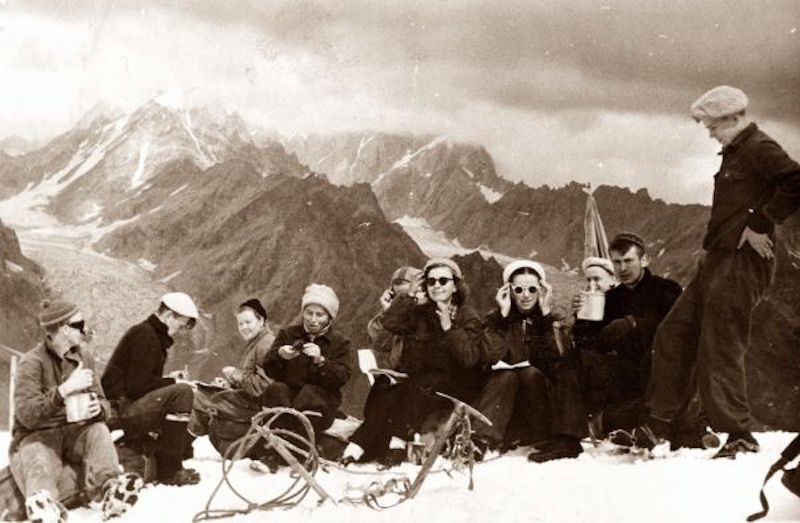 HAPPY TIMES -- THEN DISASTER BUT NOT BEFORE YURI YUDIN BECAME SICK & LEFT THE GROUP. HIS ILLNESS SAVED HIS LIFE.

BELOW: This poor fellow is dead, however he is the best preserved of the group.  What can account for this? 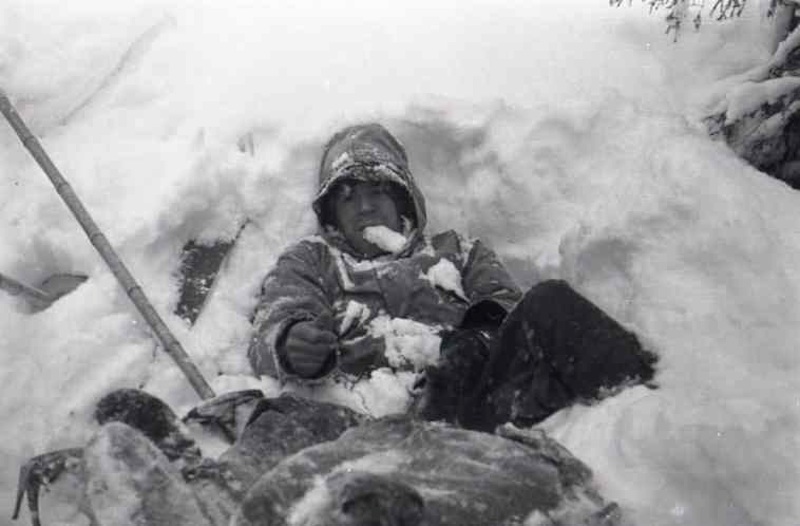 WHAT CAN ACCOUNT FOR THIS?  WHAT BEFELL THIS GROUP OF GOOD NATURED EXPERIENCED HIKERS?

REPEATING!!! A GROUP OF EXPERIENCED WINTER HIKERS CUT THEIR WAY OUT OF THEIR TENT AND FROZE TO DEATH.  WHAT MADE THESE PEOPLE LEAVE THEIR SHELTER IN SUCH A HURRY AS IN THEY WERE NOT CLOTHED FOR THE ELEMENTS? WHY DID SOME OF THE CORPSES HAVE  SO MUCH TRAUMA TO THEM?

BELOW: THE LAST PHOTO FOUND IN THE DYATLOV GROUP's CAMERA

WHAT IS IT? IS THIS WHAT DID THE GROUP IN? IT IS AN ORB? A FLASH OF LIGHT? A CAMERA MALFUNCTION? A FACE? AN ENERGY? 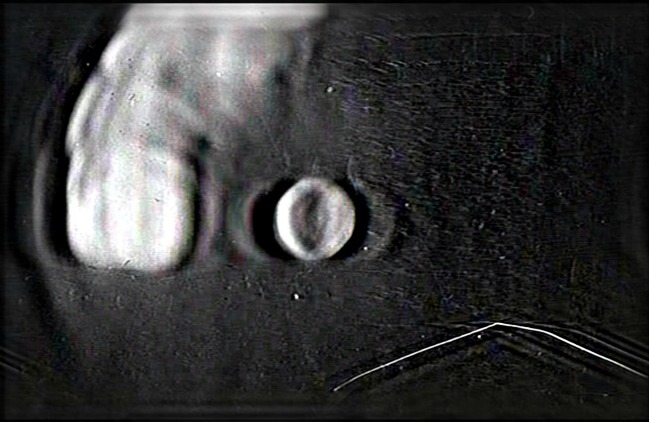 What led to this, they were all experienced backwoods people, what crushed the ribs, what made them flee the safety of their warm tent with little clothing, why did they not go back to the tent to regroup and get clothing and make a new shelter.  NOTHING MAKES SENSE... IT is not like other hikers have this disaster happen to them... This is unique and their is really no mention in the group's diary that they were in danger.  These were not stupid people, if something was in the diary, or notes that detailed their doom, then that evidence was lost in the tragedy out in the snow or the authorities omitted it.

This is unique and their is really no mention in the group's diary that they were in danger.  These were not stupid people, if something was in the diary, or notes that detailed their doom, then that evidence was lost in the tragedy out in the snow or the authorities omitted it.  The doomed group, the lack of answers, its like something out of the novella "Who Goes There" a.k.a. "The Thing" 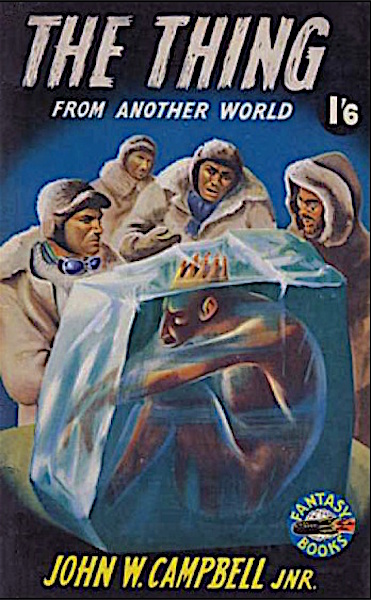 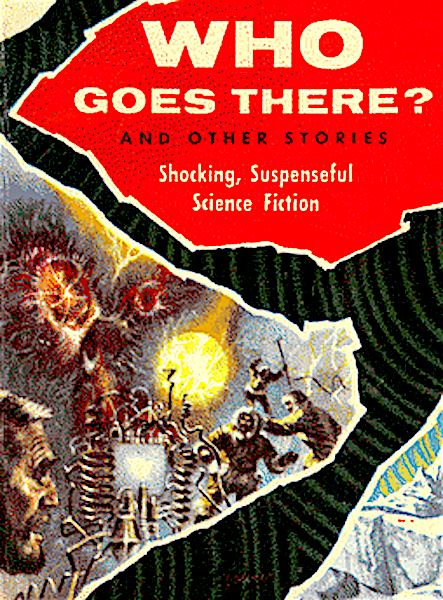 If you go to Facebook below, give Allan a thumbs up when you get there! It helps with the placement.

BELOW: POSING FOR THE CAMERA... These  people had no idea what was going to befall them, again the question is, what did them in? 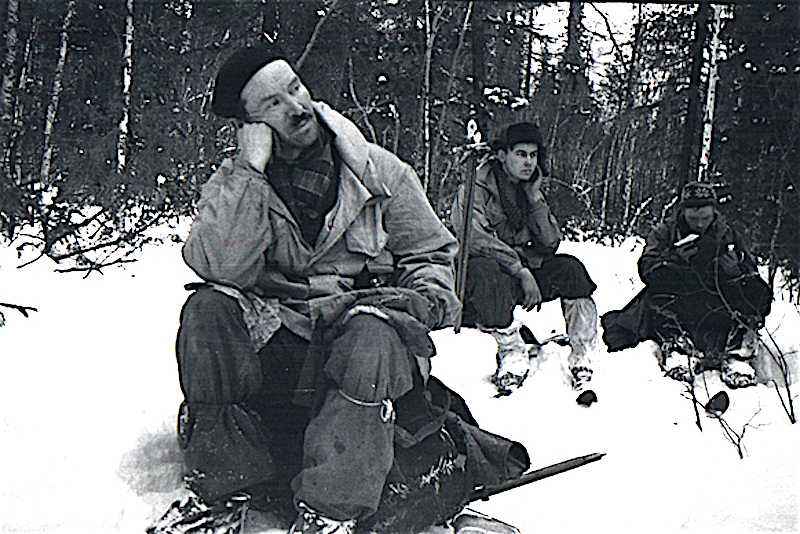 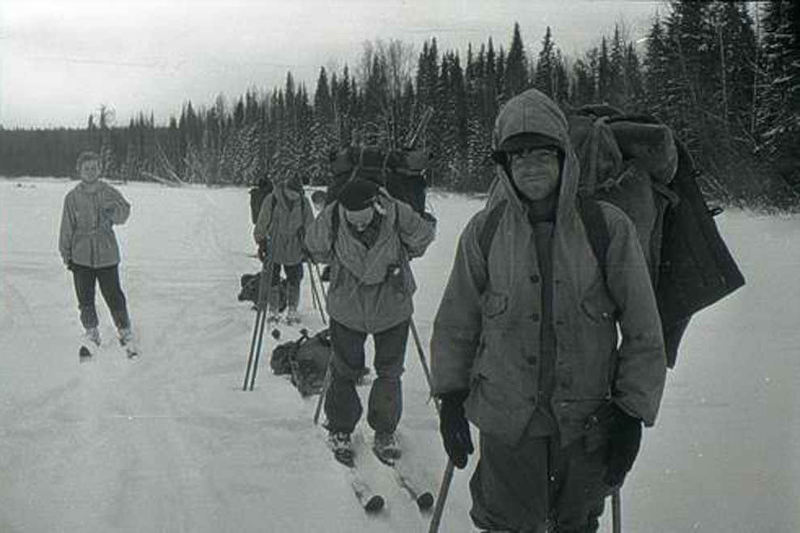 What is this last picture that was found in the group's camera? Is this a clue of what led them to abandon their tent in such haste?  Is this what injured  boil some of the group? 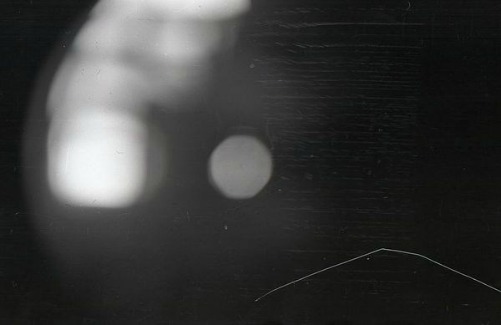 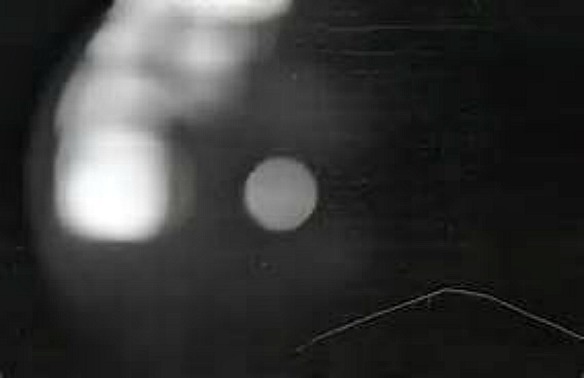 BELOW: CLOSE UP PICTURE == BLOWN UP --- WHAT IS IT?  TRICK OF LIGHT, CAMERA MALFUNCTION, OR SNAPSHOT OF WHATEVER IT WAS THAT DECIMATED THE GROUP?

OR IS THE BELOW PICTURE that of the snowman that was mentioned --- it is yeti or Abonible Snowman and that is what destroyed the group. Is this bipod a shape shifter or is the picture that of one of the group at a long distance from the camera? 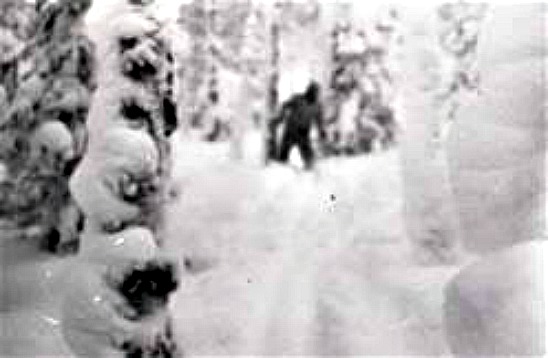 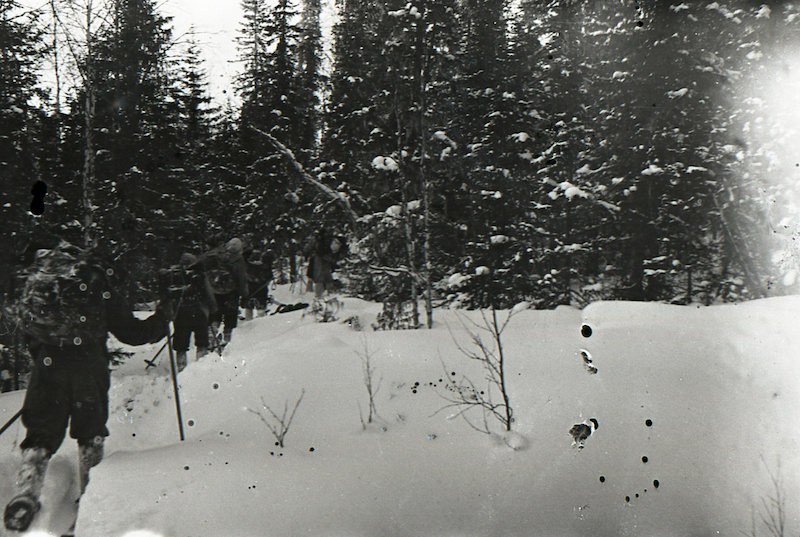 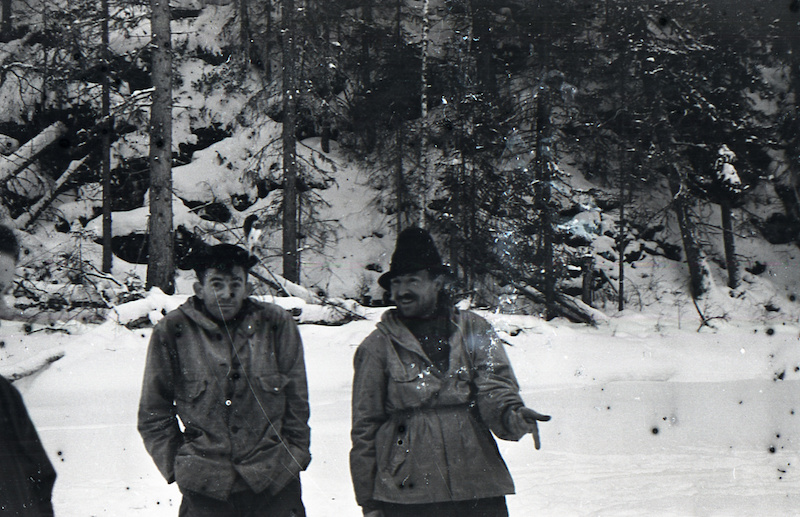 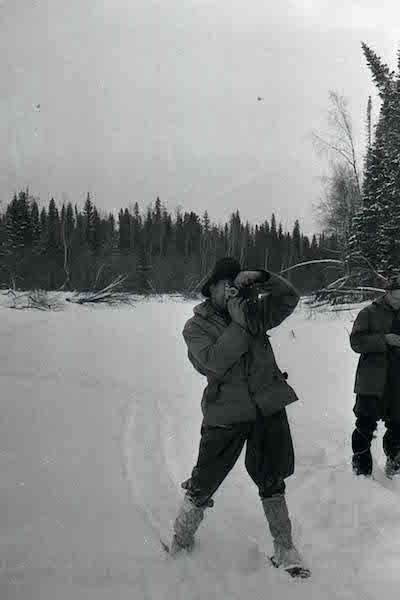 This group by way of the above photo did have at least 2 cameras, perhaps more.  One wonders was all the film found and developed and were all the pictures released to the public?  The same can be said about the journal, was their only one? Were messages or notes taken by the victims before their death found and kept by the authorities?  Somebody in the group had the presence of mind to take a photo of who knows what, before that person died.  As in the night shot on this page of some type of light or energy/// What did this group run into, I do not think it was an avalanche...  As for the Yeti picture is that really a beast or one of the skiers covered in snow making his way to the group... Again and again -- I do not think this group of hardy people were wiped out by a snow slide. 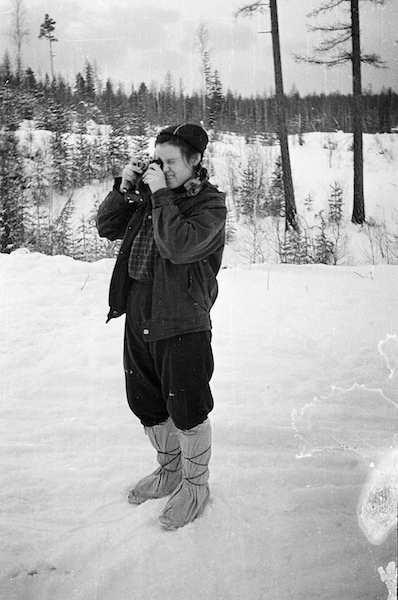 The Russians are a tough and honorable people, they do NOT panic when faced with adversity.  The Below videos gives one a glimpse of the Russian spirit. "THE FATE OF A MAN" 1959 (1st).  The hikers that were wiped out at Dyatlov Pass were NOT weak willed people, they were kind hearted and full of zest. Nothing makes sense in how these people died? What did this group of doomed adventurers, see or encounter?

How to say Dyatlov correctly; "DY" sounds like a "J"

Below are two docus in GERMAN, the audio is not so good in the last one and my DEUTCH is terrible. I cannot understand a lot of the themes in the docus.  I put the docus on this page because they have photos that are not found elsewhere of the DYATLOV  disaster. One thing --- is that -- I -- ALLAN -- does not believe that the group left their tent with no shoes and little clothing because these poor souls were panicked by the sound of a snow slide or a snow build up at their tent, by way of a pack slide.  The dead were all experienced ski-campers.  Why would the group run nearly a mile away from their tent, after a few hundred meters in "0" degree or below temperatures, these people would deduce their is no snow slide that is going to overwhelm them... What kept this group away from their tent after they exited it? At the tens is where their coats and clothes was at? The snow slide idea is absurd... Is it possible that the scene of this tragedy was altered, as in before the rescue party arrived, a top secret RED ARMY UNIT covered up or took the evidence that would shine light on what happened?  Was this group experimented on  -- on purpose or by accident by way of a top secret RED ARMY sound weapon, or was this group attacked by an alien shape shifter or YETI -- shape shifter? ... I dare say it was not an avalanche that took out this group....... As for a RED ARMY WEAPON idea, or sound blast scenario, why was not any of the trees or snow  in the area damaged by such a weapon, only the mountaineers were hurt.  Again, what befell these people?

The Below news docu -- hints that a top secret Red Army experiment led to the Dyatlov deaths.  The video has some good info but its conclusion is weak with the data presented.

DYATLOV MYSTERY -- UNSOLVED --- BEFORE & AFTER ... PHOTOS OF THE GROUP AND OF WHAT THE RESCUE PARTY FOUND --

IS THERE A LINK BETWEEN THIS TRAGEDY AND UFO ABDUCTION OR CATTLE MUTILATION? CLICK HERE FOR COW MUTILATION BY WAY OF ALIENS.