GHOST-ON-FILM-NEW-MEXICO-AND-WORLDWIDE     THESE VIDEOS & FILMS SHOW ACTIVITY- PARANORMAL GOINGS ON. Like what you see book a SANTA FE GHOST TOUR with AL PACHECO 505-986-5002

GHOST-ON-FILM-NEW-MEXICO-AND-WORLDWIDE   /One of the best television news investigations of a haunted graveyard in the Atlanta, Georgia area -- Lawrenceville.  On this news telecast note how the batteries drain at times when their is activity, this has happened countless times on Allan's investigations and on some of his tours, when they pass by or through haunted areas. 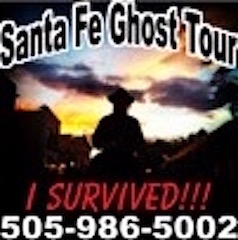 BELOW: 2006 MONTERY, MEXICO -- Not a haunted house story but a video of a witch -- maybe ghost witch flying on --- broomstick?