The cold, haunted penitentiary is known for its ghostly activity and a still-evil energy. 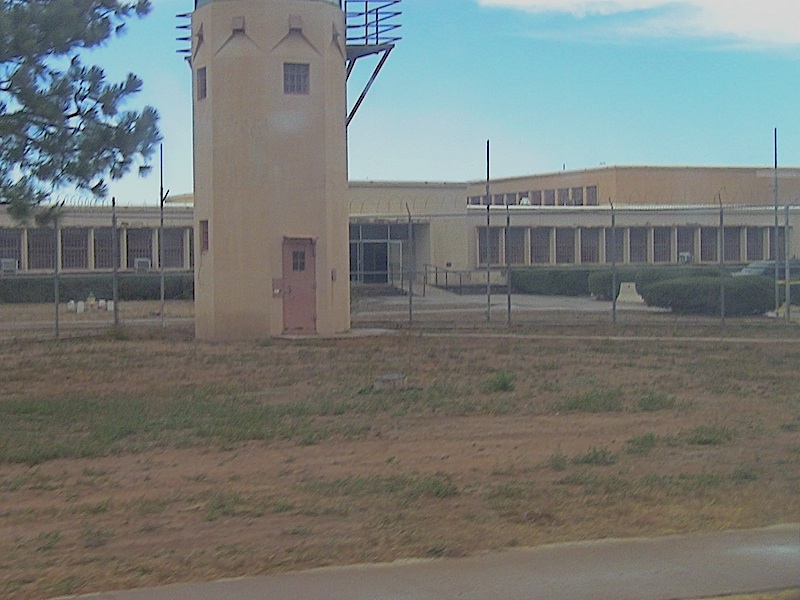 BELOW: These guys went into the prison, and encountered some ghostly activity, they treated the prison investigation as if it was a rock concert, they were radio people, so it was as if they were playing to an audience in how they conducted there trek through the haunted penitentiary. 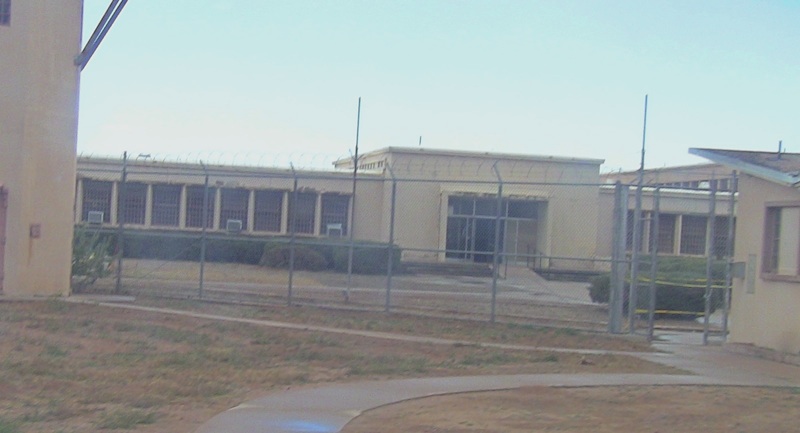 Above: All the area behind the fence was in the hands of the prisoners in 1980 during the riot. The building on the  far right and tower remained under constable control. 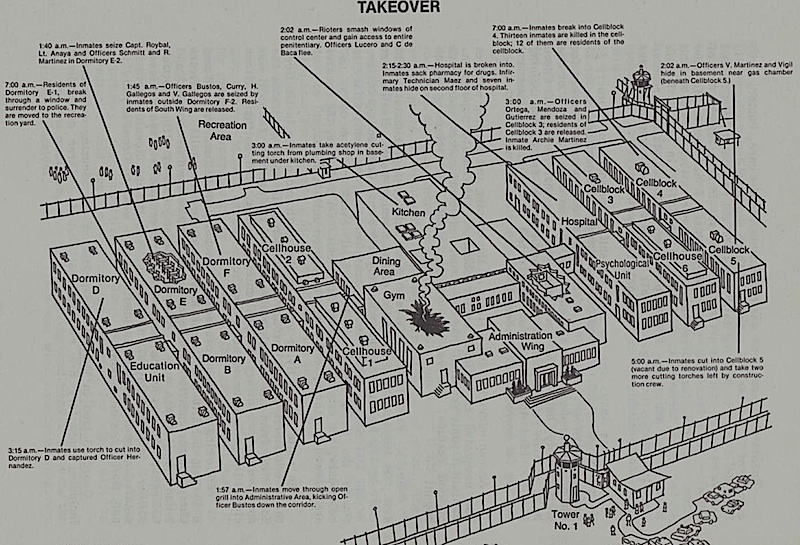 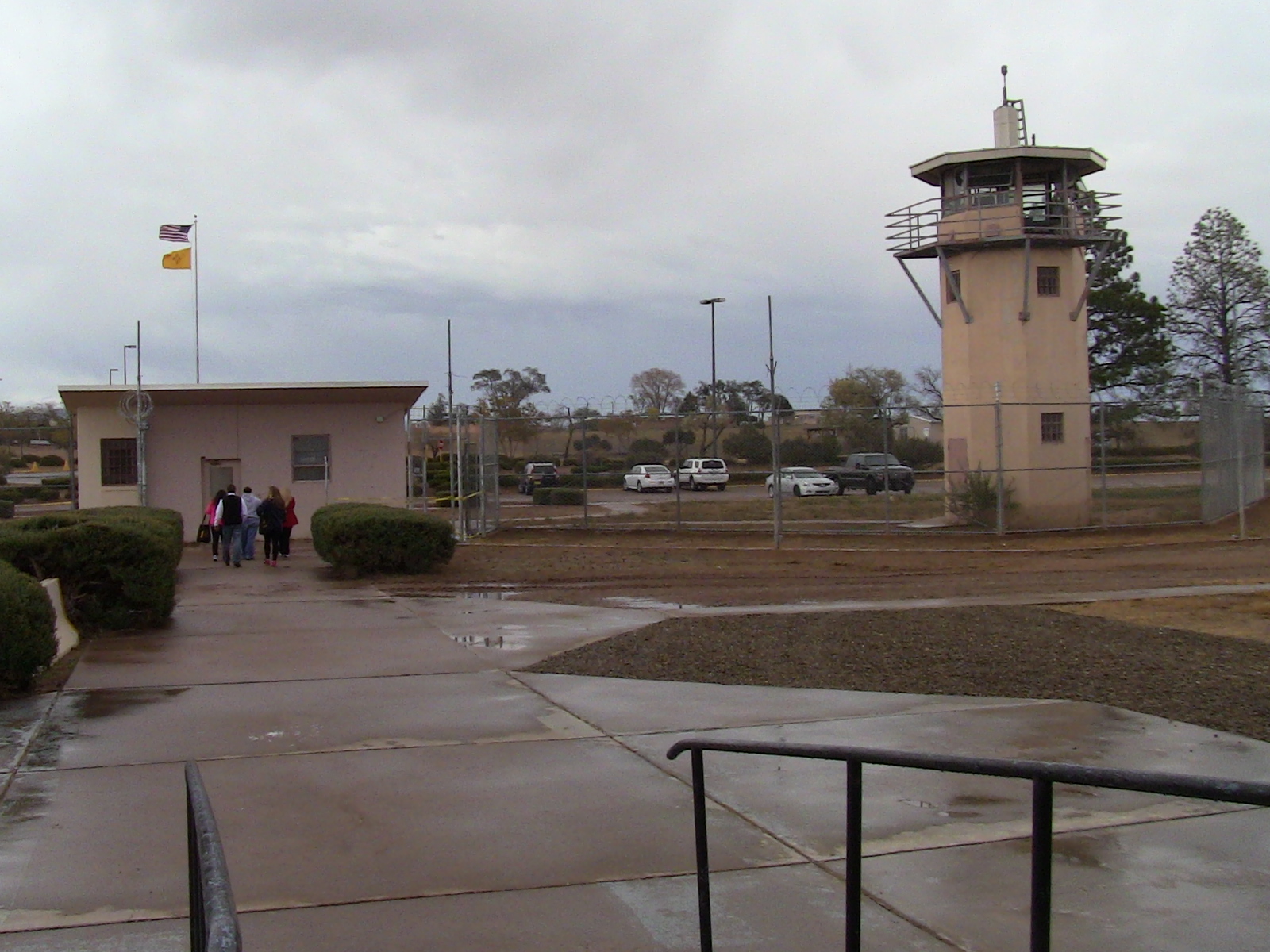 Above: A group leaving the haunted penitentiary, the building they are going to pass through is in the below photo.  This small building was taken by the rioting prisoners. The picture below shows soldiers from the NM National Guard taking out a corpse. This photo was taken a fe hours after the authority took control of the prison.  The Haunted Penitentiary is haunted by an evil energy that was invoked there, before and during the riot + it is haunted by some of the dead--- and some of the dead--- were not nice people.  SOme of the dead included - rapists, sexual predators, child molesters, etc… 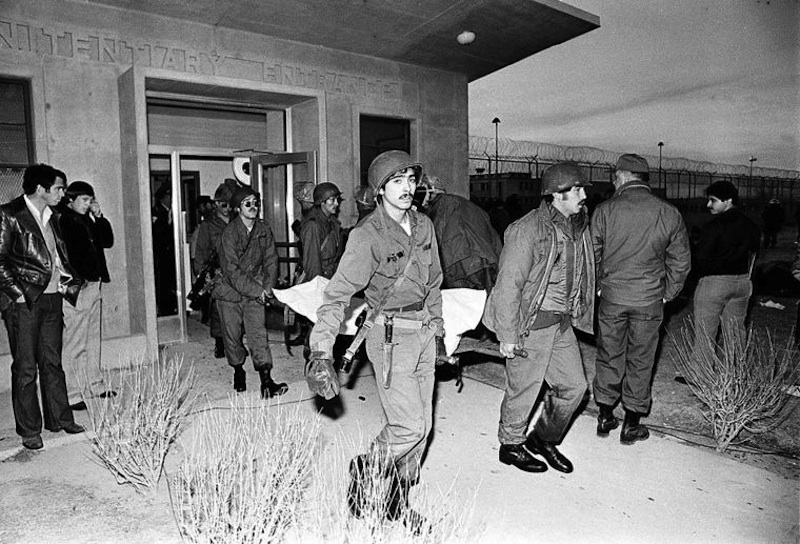 BELOW: A short docu -- on one area of the prison where the high profile inmates were housed. This is where the majority of the torturing and killing was done during the riot. 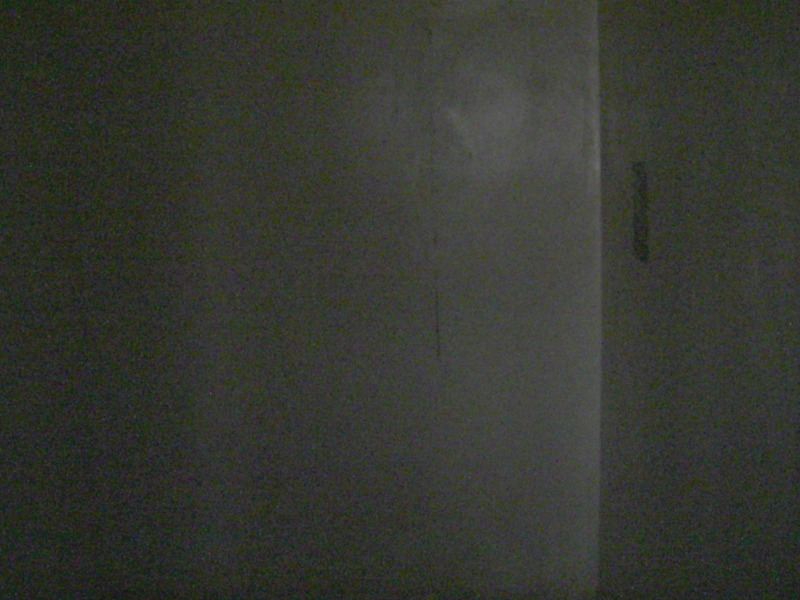 BELOW: Prison inmates trying to keep warm -- post riot…Note the wall in the background, is that blood splatter? 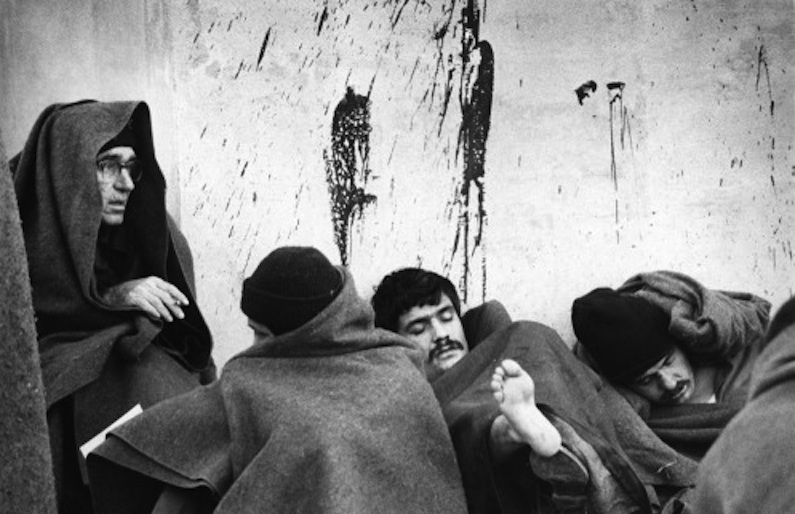 BELOW: Cleanup after the riot at hat is now the HAUNTED-PENITENTIARY. 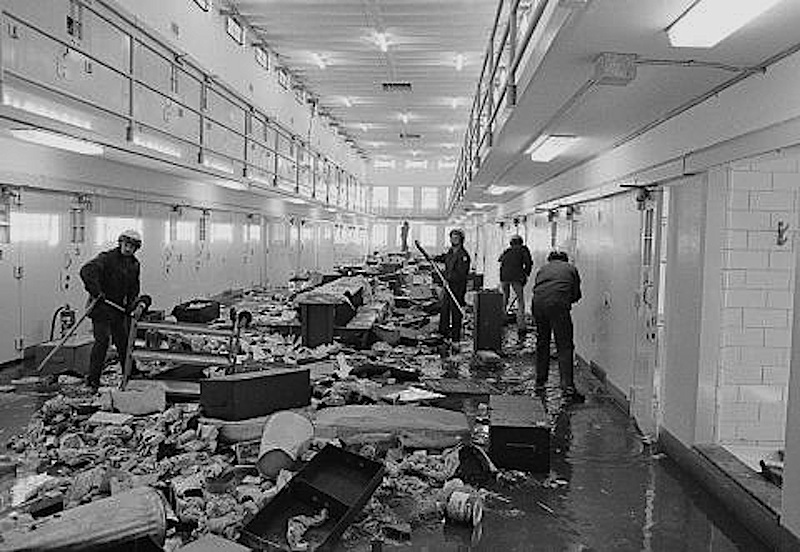 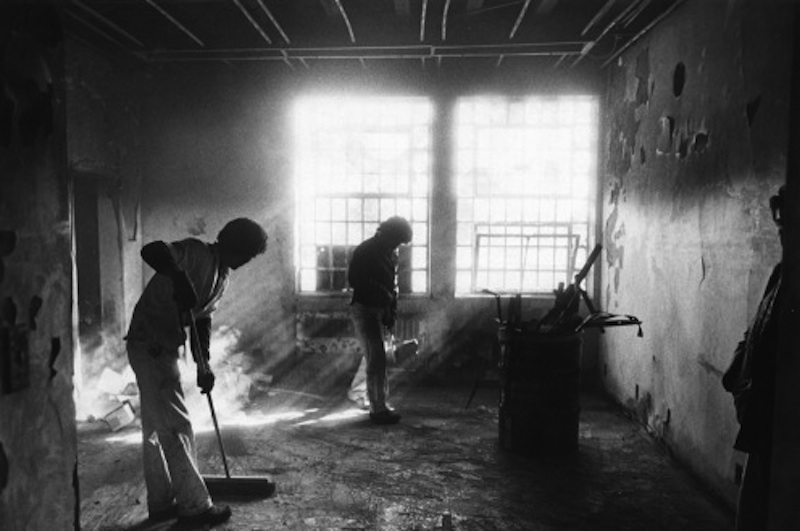 Below a short bit from a documentary-- privately run prisons -- it is all about funneling people back into prison-- it is a business--- it is not about rehab --- it is about keeping people in the BIG HOUSE--so that the corporation makes money off of the incarcerated.  Even  government prison, are not about rehab, it is about pork barrel--- and prisons are part of the system---as in money allocations and the mighty $.

Below a short documentary on how heroin is destroying USA. heroin comes into the USA from AFGHANISTAN AND MEXICO. How so? FEDERAL policies have the USA allied with corrupt Asian growers who make great profit growing poppy flowers that are then turned into Heroin. WIth USA's open borders, Heroine is brought in and vended, and AMericans get addicted to it, they either rob to get $ to buy the junk, they overdose or usually go to prison for having Heroin or stealing to get $, to buy the stuff.  The vast majority in USA prisons, are people that went the wrong way due to drugs, addiction cannot be put into the same category as RAPE or MOLESTATION.  Yet, the USA has %25 of the world's prison population and most of the incarcerated are behind bars due to drug offenses. Does it make sense to incarcerate an addict with Rapists, murderers and molesters? Violent criminals and addicts are two different categories, but addicts in the big scheme of things are viewed as potential money makers for the system. Put a person in prison, corporations can make profit off the non violent law breaker, he has to be fed and clothed, and the state + private corporation make profit from this.  If you do not break the convict of his addiction, he will return to prison due to his addiction that caused him to break the law.  Prisons are not built to rehab people, they are designed to keep a person addicted and make that person more violent. The end result is that out on parole convict will go back into the system sue to his addiction and this makes the system profit.

BELOW: The Old Santa Fe Prison during Wild West days. This facility or HELL ON EARTH is not the OLD MAIN where the riot  of 1980 took place. The Old State Pen (BELOW) was in use from 1885 to 1956. 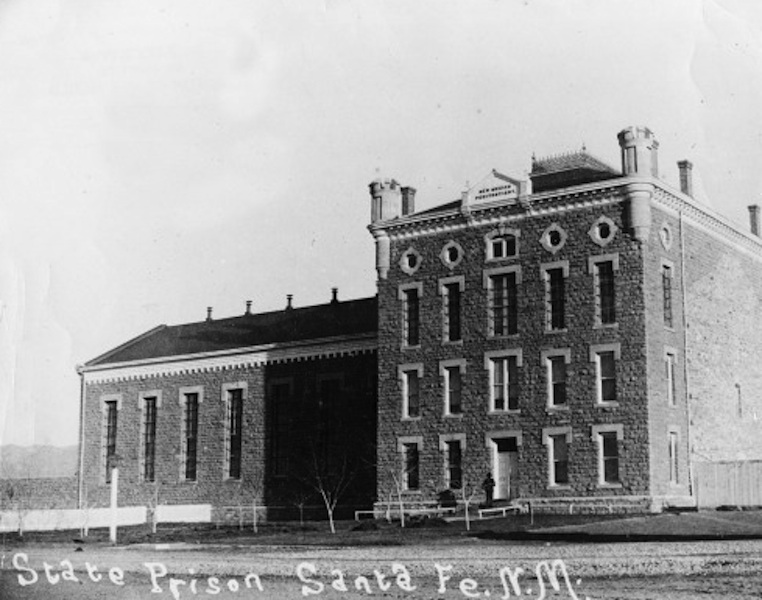 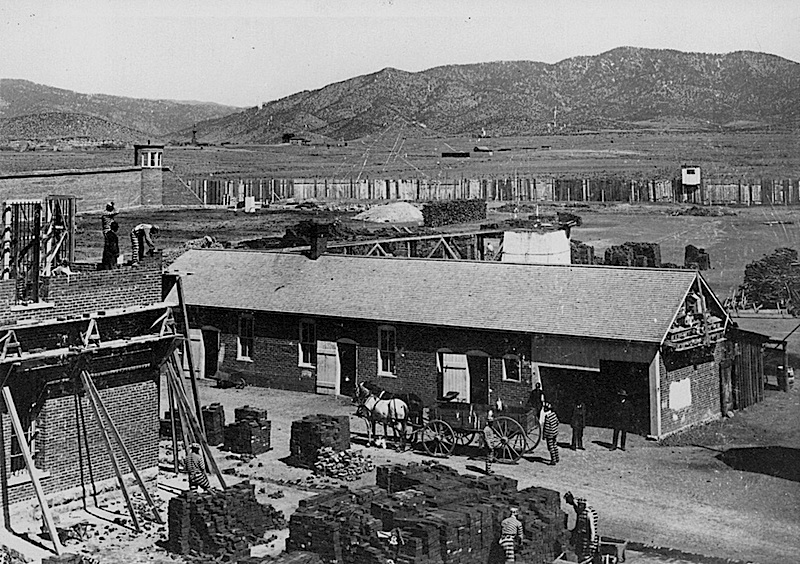 ABOVE: HARD LABOR at STATE PRISON--SANTA FE… THE PRISONERS MANUFACTURED THE BRICKS AND BUILT THE PRISON WITH THEM. 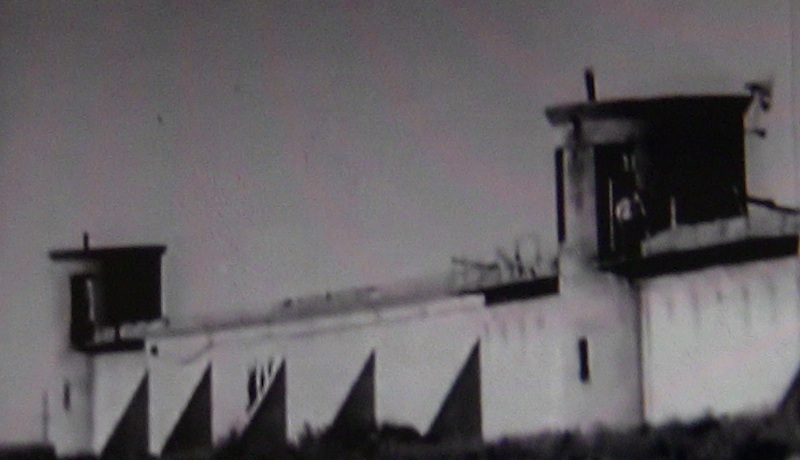 The old prison was not out of town like the present OLD MAIN etc.. The State Pen was located in what is now METRO Santa Fe. 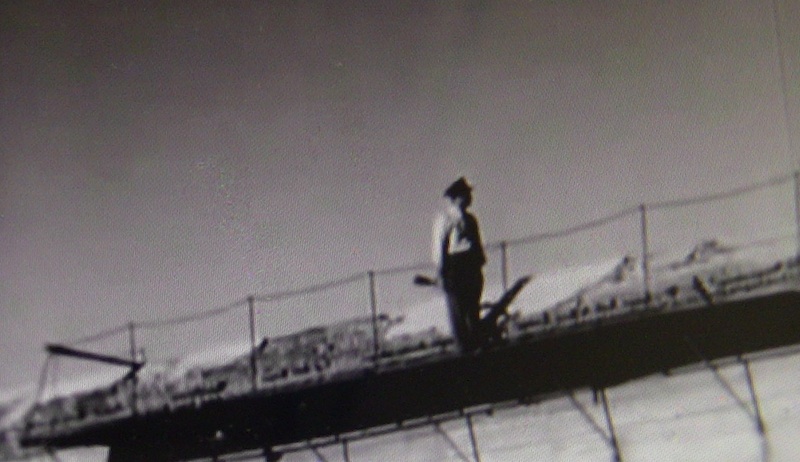 I no longer do tours of the prison--only investigations- the pages on website concerning-haunted penitentiary is from many years of tours + examinations.